In a brief, to the point montage, we see John Wick (Reeves) live a happy marriage to Helen (Bridget Moynihan) before she succumbs to an unidentified disease. How good was their marriage? Before she died, Helen arranged for John to receive a cute beagle puppy named Daisy to help him through the grieving process.

On a run to gas up his black ‘69 Mustang, he is asked by a Russian punk how much he wants for the car. When he says it’s not for sale, the Russian punk whom we learn is named Iosef (Alfie Allen, Reek on Game of Thrones) makes a comment in Russian. The first clue that he should have stopped there is John’s response – in Russian!

But no, Iosef and a couple friends break into John’s home, beat the hell out of him, kill Daisy (the actual act partially offscreen and way out of focus) and steal the car. Their second clue comes when they try to get the licence plates and VIN number changed on the Mustang and their usual source (John Leguizamo) refuses.

Meanwhile, John is digging into his basement floor and accessing a case of very efficient looking weapons. The ensuing onslaught might be predictable, but what‘s not are the accompanying details.

The violence is extended and extremely vicious – Reeves might be 50, but he moves like man half his age. Just when you think he couldn’t possibly do that – he does something more outrageous. Wick doesn’t just shoot a guy – he shoots him several times. Usually from fairly close range. He administers beatdowns that make Iosef and his pals look like the rank amateurs they are.

When he finally reaches the limits of his not inconsiderable stamina, he crashes at an upscale hotel owned by Winston (Ian McShane) and run by Charon (Lance Reddick), a formal neutral ground where no one conducts business without penalty – extreme penalty. Naturally, there’s one person – the lethal Ms. Perkins (Adrianne Palicki) – who runs that risk but without success. 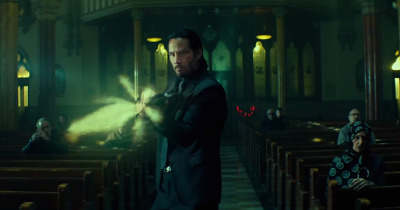 Earlier in the movie we’re introduced to Charlie (David Patrick Kelly), who heads up a unique cleaning service – one of John Wick’s genuinely witty moments comes when a member of Charlie’s crew is assigned an unusual task. Charlie is an understandably busy guy…

Veteran stuntmen Chad Stahelski and David Leitch (only Stahelski receives official credit thanks to a Directors’ Guild ruling) direct John Wick with lots of style – instead of flashy editing that makes the action choreography indecipherable, the duo settles into medium/medium long shots that remain static as the action takes place within. We can see what’s going – and what’s going on is frequently spectacular.

Michael Nyqvist (Mission Impossible: Ghost Protocol) does a superb job as Viggo Tarasov, the head of the Russian mob. His reaction to his son’s fatal error in judgement forces him away from the veneer of civilization he’s cultivate since Wick worked for him – and his explanation to Iosef about why he’s made a horrendous blunder is chilling in its matter-of-fact recapitulation.

Another great turn is Willem Dafoe’s Marcus – a character who definitely qualifies as mysterious, and who plays a significant role in a minimum of screen time. It’s a role that requires gravitas and precision and Dafoe delivers.

Reeves shines here as he executes stunt after stunt with precision and makes it clear that Tom Cruise, Liam Neeson and Denzel Washington aren’t the only 50-plus actors who can get it done. He even gets to shine in a memorable moment of emotional overload that colors every scene before and after it.

Besides the cool details – like the hotel and the cleaning service – that give John Wick unexpected depth, and the avoidance of overly flashy editing, there are other cool stylistic bits that reinforce just how much Stahelski and Leitch bring to the table. One of the most interesting is the subtitles used when characters speak Russian. Colorful stuff.

John Wick is also sleek – mixing all its action and unique detail work into a mere hour and forty minutes, yet it doesn’t feel rushed or overstuffed.

It would be interesting – and probably a lot of fun – to see what else is going on in this world. There are probably a lot more details waiting to be unveiled. In the meantime, John Wick is a smart, exciting action movie that delivers.