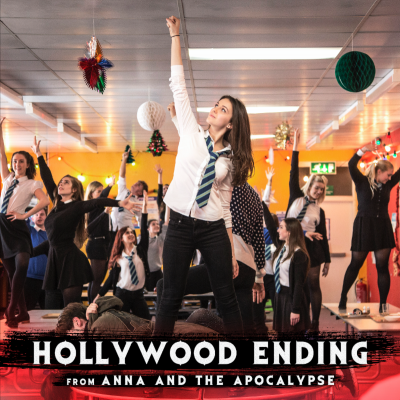 Interscope has released the first single – Hollywood Ending – and the soundtrack album for Orion Pictures’ zombie musical Anna and the Apocalypse. Both are available today via all digital partners.

The film’s cast will perform at the 4th Annual Elsie Fest on Ocotber 7th at Central Park’s Summerstage.

Anna and the Apocalypse opens on November 30th.

Interscope Records releases “Hollywood Ending” – the first song from the official soundtrack to the upcoming Orion Pictures film Anna and The Apocalypse which will be released in theaters this holiday season – today via all digital partners here. Watch the music video for “Hollywood Ending” here.

Anna and The Apocalypse follows Anna (Ella Hunt), whose life is dominated by the typical concerns of her youthful peers until the Christmas season in her small British town brings not Santa but an outbreak of the Undead. A zombie apocalypse threatens the sleepy town, forcing Anna and her high school friends to fight, sing, and slash their way to survival with a fast-spreading undead horde in relentless pursuit.

Anna and the Apocalypse is based on the 2010 BAFTA winning short film Zombie Musical; directed by John McPhail (Where Do We Go From Here); written by Alan McDonaldand the late Ryan McHenry (Ryan Gosling Won’t Eat His Cereal viral series); with original music by Roddy Hartand Tommy Reilly – a film and TV songwriting partnership from Glasgow, Scotland, who have each released several critically acclaimed solo albums. Watch the trailer HERE.

The cast is scheduled to perform at the 4th annual Elsie Fest on October 7th at SummerStage Central Park in New York City. Elsie Fest is a one-day outdoor music festival that celebrates the stars and songs from the stage and screen.