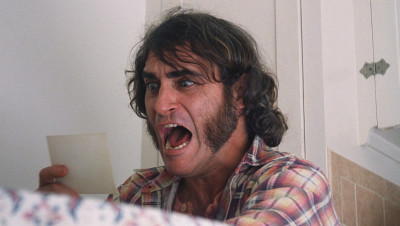 Inherent Vice is a twisty mystery that fuses old school PI movies with the psychedelia of the late sixties and early seventies. The point of fusion is the lead character, Larry ‘Doc’ Sportello, a private eye who always – at a minimum – half baked (and usually full on stoned) but somehow manages to be more on the ball than anyone else.

The film opens with what we come to realise is an unreliable narrator – and an old flame of Doc’s visiting him at home to ask him to look into the disappearance of real estate mogul/billionaire Michael Z. Wolfman (Eric Roberts). Doc (Joaquin Phoenix) says he’ll look into it and before you know it, he’s being framed for murder, to the delight of Lt. Det. Christian F. ‘Bigfoot’ Bjornsen (Josh Brolin) – a cop who spends his days committing ‘civil rights violations’ and nights and days off trying to be an actor (we see an example of his work early on).

As the narrator, whom we come to know as Sortilège (Joanna Newsome) continues her tale, Doc gets hired a black ex-con to find an Aryan Brotherhood ex-con who owes him money for something he did for him while in jail (the two apparently discovered there are areas of dislike for the government which they had in common). 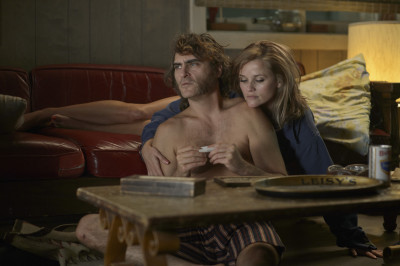 Then there’s there alleged suicide, Coy Harlingen (Owen Wilson) who turns up alive and in hiding from someone nasty – almost everywhere Doc turns. And the coke sniffing dentist, Dr. Rudy Blatnoyd, who is part of Golden Fang Enterprises – a consortium of dentists who like to party (but which also happens to be the name of a boat that may be owned by a nefarious organization (also called the Golden Fang).

Over the course of the film, there are so many twists and turns – and turns that twist back on themselves – that the very fact that they all seem to form a kind of circle around Doc goes way beyond psychedelic. And I haven’t even mentioned his Assistant D.A. girlfriend – played by Reese Witherspoon – or that his ex, Shasta Fay Hepworth – played by Katherine Waterston – has a peculiar take on how to be an ex. Or that Benicio Del Toro steals a couple scenes as Doc’s lawyer, Sauncho Smilax, Esq. – or that Maya Rudolph does the same as Doc’s sweetly snide (shared) office manager, Petunia Leeway.

Inherent Vice is set in the early ‘70s and persuades one to take the maxim about the ‘60s (if you remember them, you weren’t really there) and extend it a bit further. There are dozens of characters – I haven’t mentioned Wolman’s wife (Serena Scott Thomas) or the Asian masseuse/hostess, Jade (Hong Chau), who keeps turning up, or the FBI guys named Flatweed (Sam Jaeger) and Borderline (Timothy Simons) who may or may not know something about Wolfman – but Anderson (who also wrote the screenplay) makes them all fit into the peculiar puzzle he’s constructed.

He takes noir visual elements – Dutch angles, smoky bars, dingy streets and so forth – and twists them into dayglo psychedelia. His Sam Spade uses dope instead of booze but is no less effective for it. Inherent Vice is, in essence, The Big Sleep on really, really good acid. It would a classic case of understatement to say it’s a good trip.