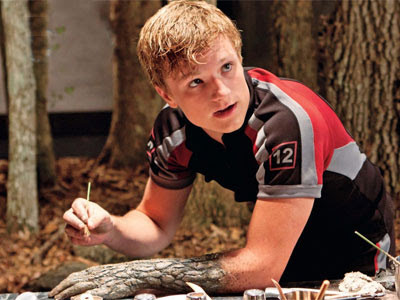 The Hunger Games’ Josh Hutcherson will be a guest judge on the third episode of this season of Face Off (Syfy, Tuesdays, 9/8C). Hutcherson was no doubt chosen to guest judge because of his Hunger Games character, Peeta Malark, who turned out to be a master of disguise in a memorable sequence the franchise’s first film.

As  previously announced, seven-time Academy Award-winner and makeup legend Rick Baker (makeup artist for American Werewolf in London, The Men in Black trilogy, Michael Jackson’s Thriller, Planet of the Apes) will appear in the season’s first two episodes, first mentoring the artists and then appearing as a guest judge.

Face Off will return on Tuesday, January 13 at 9PM for an action-packed eighth season themed “Return of the Champions.” In a twist on the show’s traditional format, three former champions, Rayce Bird (Season 2), Anthony Kosar (Season 4) and Laura Tyler (Season 5), will return in the premiere and select teams of five new artists who they will coach throughout the season.

Additionally, the Season 8 premiere will be super-sized over two episodes.  At the end of the premiere, host McKenzie Westmore delivers a challenge twist in lieu of an elimination, forcing the action of the premiere to carry over into the next week’s episode.

Also appearing on this season of Face Off are:

Face Off is a competition/elimination series exploring the world of special-effects make-up artists and the unlimited imagination that allows them to create amazing works of living art. As a member of the multi-generational family dynasty whose name is synonymous with the make-up effects field, actress McKenzie Westmore brings expertise to her role as host of the series.  Some of SFX world’s most celebrated figures judge the competition – multiple Academy Award-winner Ve Neill (The Hunger Games, Pirates of the Caribbean), industry veteran Glenn Hetrick (CSI: New York, Heroes, Legion), and creature designer Neville Page (Avatar, Prometheus). World-renowned Hollywood makeup artist Michael Westmore (Star Trek) serves as the contestant mentor.

Face Off is a production of Mission Control Media with Dwight D. Smith, Michael Agbabian and Derek Atherton serving as executive producers.