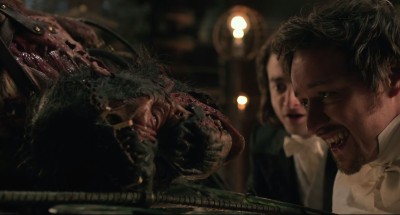 When the movie Igor was announced and James McAvoy and Daniel Radcliffe were attached, the premise – the story of Frankenstein told from the point of view of his assistant, Igor – I thought, ‘What a great premise!’ When the film’s title was changed to Victor Frankenstein, I thought, ‘That kinda makes sense – everyone knows who he is; almost no one really thinks about Igor.’

Then we got a cool a trailer and a few really cool clips. It was all good. And then it all came crashing down. Those cool moments form the trailer and the advance clips? They’re pretty much the sum total of the movie’s good moments.

The first problem with a movie looking at the Frankenstein story from Igor’s point of view is that Igor wasn’t in Mary Shelley’s novel. That’s a minor quibble, though, since most people think of the James Whale classic film when they hear the name anyway. So that’s a quibble easily dealt with.

The next problem is that Igor is the classic dim bulb hunchbacked assistant that Mel Brooks had so much fun parodying in Young Frankenstein – and in Victor Frankenstein (after a gross bit of surgery tomfoolery) he’s both upright and Victor’s intellectual equal. That could have been a lot of fun, and shards of the broken mess that is Victor Frankenstein that reach for quality have him not only helping, but correcting Victor.

But all this comes after we meet the nameless hunchback who becomes Igor – a clown who, on his own, has become an unlicensed physician to the circus ‘family’ – and is treated like crap by them anyway – except for a pretty aerialist called Lorelei (Jessica Brown Findlay, Downton Abbey). (He comes to Victor’s attention when Lorelei falls and he saves her life with his bare hands and Victor’s pocket watch!) 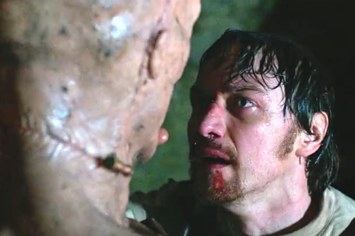 So, here’s the thing, during the big escape from the circus, the circus’ knife-thrower accidentally kills another roustabout and the blame is laid on Victor and Soon-To-Be-Igor. Enter dedicated cop, Inspector Turpin (Andrew Scott, Sherlock’s Moriarty) – who figures out what really happened but still puts up wanted posters of them for murder! Because crime against God!

It all gets terribly involved with Igor and Lorelei falling in love; Turpin going mad; a first experiment (using a chimp) going wrong and having to be put down; a skeevy medical school acquaintance of Victor’s deciding to back him (for equally skeevy reasons); Victor being yelled at (and backhanded) by his father for besmirching the family name and on and on and frakkin’ bloody on…!

Another problem is that Victor is very one-note – imagine a bipolar person who’s only ever in the manic phase and you’ve got Victor. He has one speed (full out) and one direction (straight ahead). It’s no wonder that Igor is able to correct him – he never looks back long enough to make sure he’s got it entirely right!

Technically, Victor Frankenstein is a pretty good looking movie: the set design, props and costuming are all consistently on point; the effects are better than average; the cinematography appropriately moody. The story – scripted by Max Landis (Chronicle), who should surely know better – and the direction, by Paul McGuigan (Lucky Number Slevin, Sherlock), does keep all of the plot’s various balls in the air. It’s just that the result is hysterically funny everywhere except where it’s supposed to be.

The most artistically designed pile of crap is, after all is said and done, still a pile of crap. Victor Frankenstein is, sadly, exactly that. When it was over, I wanted my admission, my two hours and my bus fare back (and I got a ride…).