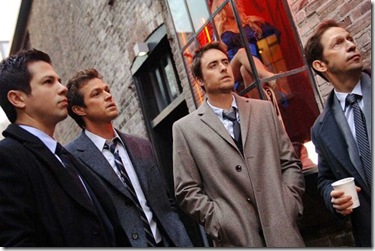 Rick Martinez [Freddy Rodriguez] begins his first day at the CIA by being mistaken for a terrorist – with his lunch being mistaken for ‘dangerous fluids.’ It turns out that a computer glitch had merged the list of agents’ names with suspected terrorists!

From there, things go from bad to worse for Martinez as he discovers his job has been cut. But wait! There is an opening in something called the ODS [Kurtwood Smith’s Director Higgins refers to the unit as ‘Odious’] and Higgins decides to send Martinez in as a mole to spy on them and report on any wrongdoing he might observe [‘No crime is too small!’]. Of course the ODS team susses out the mole and sets him up so he has to do what they say.

The ODS team is led by Michael Dorset [Eric Close], a wily veteran who that his unit will continue to exist as long as they don’t screw up. Then there’s North Edinburgh native Billy Collins [James Murray] – former British Secret Service until some boyish prank got him deported from his own country! Finally, there’s the dour ‘human weapon,’ Casey Malick [Tim Blake Nelson] – who picks his spot, as you will see…

After embarrassing Martinez any number of ways – including interrupting a steak dinner with Higgins’ right-hand person, Fay Carson [Carmen Ejogo] – the unit finds a real operation: retrieving a French-American journalist from Arabian terrorists. Off the books, of course…

Written by series creator Tom Spezialy and directed by Brett Ratner, the premiere of CHAOS moves like a freight train as it whips Martinez through one of the worst weeks of his life. Not only does he not have much say in anything, he’s pretty much the go-to sacrificial lamb during the unit’s time in the desert. On top of that, it seems that everyone with whom he comes in contact is playing some kind of angle – even the lovely Fay.

Frankly, the awkward fusion of comedy and procedural drama is less than wonderful. There are a few moments [very few] when it feels like things might just come together [Collins wooing a favor from a crusty agent assigned to guard billions in counterfeit money], but they aren’t enough to really make the episode soar. Given that Spezialy has written for some terrific shows [Desperate Housewives, Parker Lewis Can’t Lose, Dead Like Me, Reaper], there’s enough here to suggest it might grow into a show worth watching. But USA Network would probably have done it better. Still, at least CBS is trying to stretch a bit.