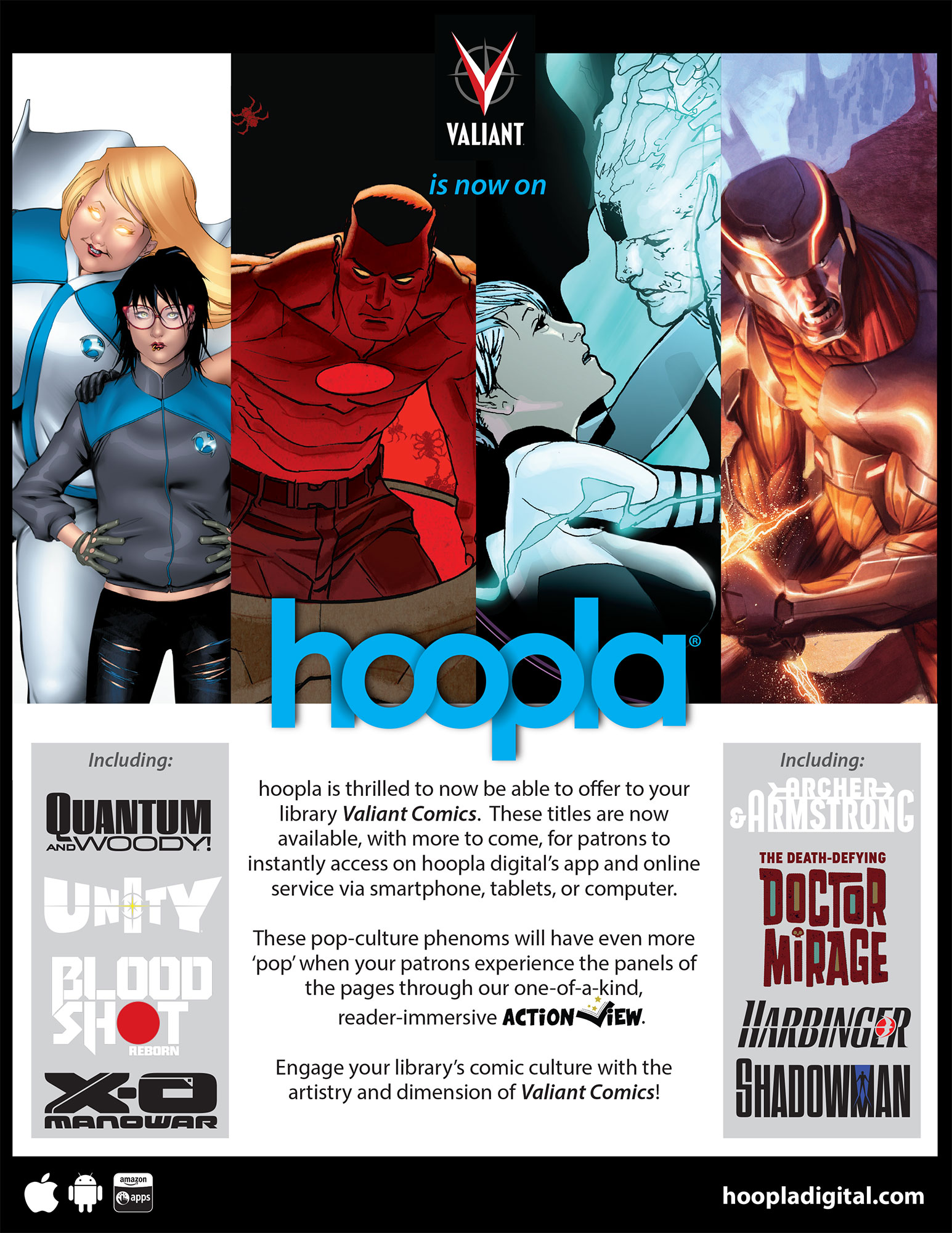 hoopla digital has added new titles from Valiant Comics to it roster of over 400, 000 movies, TV shows, music albums, eBooks, audio books and comics – titles that it shares with public libraries across North America.

“We built hoopla’s Action View experience especially for celebrated titles like X-O Manowar, Bloodshot Reborn and Archer & Armstrong so fans can truly appreciate the artistry of these classic stories and we’re thrilled to partner with the award-winning Valiant Entertainment to bring their titles to library cardholders anytime, without any holds or waits,” said Jeff Jankowski, founder and owner of hoopla digital.

“Our number one priority is connecting with new readers and libraries are of central importance to achieving that goal,” said Valiant Chief Operating Officer & CFO Gavin Cuneo. “We’re excited that library cardholders across the country now have the means to discover Valiant’s award-winning catalog of graphic novels through hoopla digital and all they need is a library card to get started.”

There is no waiting to borrow titles on hoopla digital since on-demand content can be enjoyed by multiple patrons simultaneously. Patrons who use hoopla digital also avoid library late fees as digital content borrowing periods simply expire without charges.

To begin enjoying comics on hoopla digital, library-card holders can download the free hoopla digital mobile app on their Android or IOS device or visit hoopladigital.com. New comic books will be added to the service weekly. The service is available only to patrons of participating public libraries.

Valiant Entertainment is a leading character-based entertainment company that owns the largest independent superhero universe in comics. With more than 81 million issues sold and a library of over 2,000 characters, including X-O Manowar, Bloodshot, Harbinger, Shadowman, Archer & Armstrong, and many more, Valiant is one of the most successful publishers in the history of the comic book medium. Today, the company’s characters continue to be forged in publishing, licensing, film, video games, and beyond. Valiant consistently produces some of the most critically acclaimed comics in the industry and has received numerous industry awards and accolades, including a Diamond Gem Award for Comic Book Publisher of the Year. In 2015, Valiant announced a multi-picture deal to bring Bloodshot and Harbinger to the big screen as feature films. Visit Valiant online at ValiantUniverse.com.

Trajectory recently received the 2015 Innovation Award by the Book Industry Study Group for its revolutionary work. Trajectory Inc. is an American technology company that focuses on solving the problems facing the global book publishing market. It was founded by Jim Bryant and Scott Beatty in 2011 and is headquartered in Marblehead, Massachusetts. The company is known for pioneering the development of a series of deep learning algorithms that are used to analyze and recommend books.