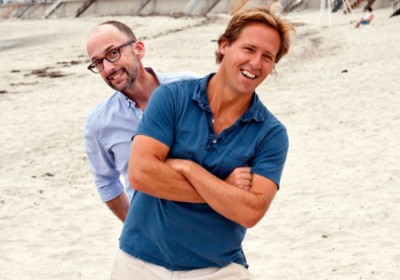 How does a pair of Academy Award winning pair of screenwriters follow-up their crowning achievement? They both take on the world of television. Jim went on to play a Dean of a community college and Nat played a dreamer and an underachiever who moved in to help his sister. This summer, the dynamic duo wrote, act and making their directing debut in one of the best films of the summer, The Way, Way Back. Dean Rogers recently sat down with Nat & Jim to get the story on The Way, Way Back

How did the idea of writing The Way, Way Back came to be?

Jim Rash: It was two things really. One, we both grew up on the East Coast so we have an affinity for water parks. Getting dropped off at them and cast out by our parents. So that was part of it because I think we are always drawn to places where we can find eclectic characters and I felt like that was a good place for it. And I think another thing is, other than some character inspiration throughout all of the characters, the first scene of the movie is verbatim from something that happened to me. When I was fourteen, Duncan’s age, my stepfather and I had that conversation in the car on the way to our summer vacation in Michigan. I’m from North Carolina and we would drive up there. One year he had that conversation and asked me what I though I was, [on a scale of one to ten]. I said a six and he said a three and we had the same little life lesson he was trying to teach me. So we used that… we knew that was a place to start the movie and then went from there.

Jim, congratulations on Community making season 5. It’s one of my favorite series. Now, you’ve written the episode “Basic Human Anatomy”, which was your first episode in television writing. How did you come up with that idea and what was your inspiration?

Rash: Basically, I went up in the writers’ room about two weeks prior or a little bit more before I was supposed to be sent off to write the script. I took a few ideas to them because we sort of had this… they had an available storyline. We talked only about breaking up Troy and Britta. That’s the only thing that had to happen in my episode. So with that in mind, we sort of started talking about… I just threw out Freaky Friday as something and randomly, the writers said, “Oh my God, we’ve talked about body switching for every season but we didn’t have a way to make it work.” And then just by that conversation we realized, it felt like a good way for our characters to break up with each other to see Troy as a man struggling with becoming a man and not able to face this task of breaking up with Britta and utilizes the idea that Abed will do it for him as him. For me, I love the Community episodes that move our characters in this new dramatic place. Once we sort of fleshed out that story, I was off to write.

Nat, you had a great run with Ben & Kate and I am sad that Fox Network cancelled the show especially since it has positive ratings. I like to know what do you miss about being the lead actor of your first series.

Rash: The attention (everyone laughed) Just the pampering…

Nat Faxon: I miss primarily the people that were involved in that show. You know, Dana Fox who created the show, is such a wonderful person. She’s really collaborative and really creative. She often asking for open input and is open to take on any ideas. Jake Kasdan who directed the pilot and served as an executive producer is someone that I worked with a lot before. So, I missed those people. As far as the role, it was the first chance I really got to be front and center and not to be like the fifth supporting lead who just comes at the beginning then you sort of see a little bit and then comes in the end for a little bit and then that’s it.

You know, having the responsibility and having more meat, more things to do was really a fun change for me. I just love the opportunity to be able do that and I been doing this long enough. I just never had really gotten the chance to do something like that. Being cancelled, I guess I miss that. Hopefully, there will be more opportunities for that.

Rash: He’s getting ready to shoot a pilot.

It seems that the Way Way Back needs a theme song to define its presence on the screen. What song would you pick?

Faxon: I think the music that we have in the film is a great representation of these types of films because I think it is important for us to span decades and genres in a sense. We wanted the music that were CDs that were probably left in Trent’s beach house for ten years that are on constant rotation in the six-disc changer. As well as the more modern music that’s apparent in the water park that Owen would listen to and as well as the retro Robert Palmer sneaking-Sally-through-the-alley songs.

We were lucky to have Edie Brickell write a pair of original songs for the movie that bookend the film. The one at the beginning and the one at the end. The one at the end its titled, “Go Where the Love Is.” I feel like in a sense that is the theme song for the movie in a way. It’s a movie about a mother and son sorta finding their way back to each other and to go where the love is. So, it does encapsulate what the movie is all about. I guess I will pull for that,

I agree with Nat, 100% – Join Steve Carell, Toni Collette and Sam Rockwell as Oscar-winning writers Jim  Rash & Nat Faxon take us The Way, Way Back when it hit the theaters TODAY!

This is Dean Rogers signing off!