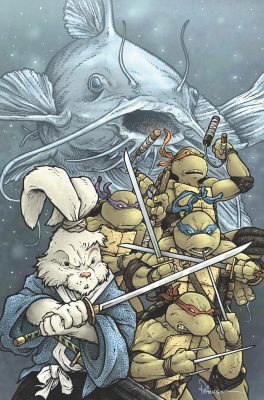 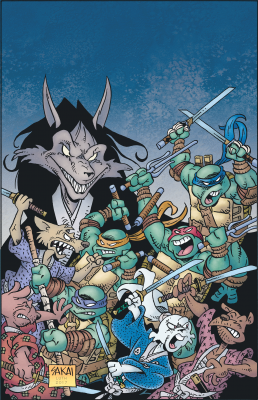 Milwaukie, OR. (April 2, 2017)—Coming this summer, two decades after their last encounter, comic book universes collide as the Teenage Mutant Ninja Turtles step foot into the world of Usagi Yojimbo in a special one-shot comic.

The legendary creator of Usagi Yojimbo, Stan Sakai, will write and illustrate a new adventure which sees ronin rabbit Miyamoto Usagi cross paths with Leonardo, Raphael, Donatello, and Michelangelo. Miyamoto Usagi has embarked on a quest to save Japan, and combining forces with the Heroes in a Half Shell to take on the maniacal Jei may be the only path to coming out of this alive.

“I had wanted to reunite Usagi and the TMNT for a while, but these are not the Turtles that he knew,” said Sakai. “Relationships have to be reestablished, suspicions overcome, and trust earned. The survival of all Japan literally rests on them working as a team.”

The Teenage Mutant Ninja Turtles and Usagi Yojimbo franchises have a long history, previously appearing together in their respective comics, animated television series, and the popular TMNT line of toys.

“Stan and I both started out the same year, 1984, and here we are still living the dream telling stories with characters we created over three decades ago,” said Kevin Eastman, cocreator of the Teenage Mutant Ninja Turtles. “I love the fact that our two creations were intertwined from the beginning and could not be more thrilled that Stan is coming back to tell a new story in the IDW TMNT comics universe.” 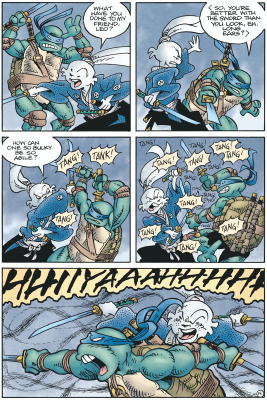 This exciting crossover event will be available this July in standard comic book format as well as in an amazing deluxe hardcover collector’s edition. Both editions feature exclusive extras including layouts, pinups, character studies, and more. Be sure to ask your local comic shop about the special variant cover by David Petersen of Mouse Guard fame.

For more than thirty years, Dark Horse Comics has proven to be a solid example of how integrity and innovation can help broaden a unique storytelling medium and establish a small, homegrown company as an industry giant. Founded in 1986 by Mike Richardson, the company is known for the progressive and creator-friendly atmosphere it provides for writers and artists. In addition to publishing comics from top talent, such as Eric Powell, Mike Mignola, Geof Darrow, Brian Wood, Gail Simone, Stan Sakai, and Guillermo del Toro, and comics legends, such as Will Eisner, Milo Manara, Kazuo Koike, Neil Gaiman, and Frank Miller, Dark Horse has developed its own successful properties, such as The Mask, Ghost, X, and Barb Wire. Its successful line of comics, manga, and products based on popular properties includes Dragon Age, Buffy the Vampire Slayer, Aliens, Conan, Tomb Raider, Halo, The Witcher, Serenity, Game of Thrones, and Avatar: The Last Airbender. Today Dark Horse Comics is the largest independent comic book publisher in the US and is recognized as one of the world’s leading entertainment publishers.

IDW Games’ diverse line-up includes the international phenomenon Machi Koro, as well as hit licensed games such as X-Files, Back to the Future, The Godfather, and TMNT.

IDW Entertainment serves as the worldwide distributor of Wynonna Earp airing on the Syfy Channel in the U.S. and is producing BBC America’s Dirk Gently, based on the bestseller by Douglas Adams starring Elijah Wood and Sam Barnett.

Stan Sakai was born in Kyoto, Japan, grew up in Hawaii, and now lives in California with his wife Julie. He has two children, Hannah and Matthew, and two stepchildren, Daniel and Emi. Stan received a fine arts degree from the University of Hawaii and furthered his studies at the Art Center College of Design in Pasadena, California. Stan’s creation Usagi Yojimbo first appeared in comics in 1984. Since then, Usagi has been on television as a guest of the Teenage Mutant Ninja Turtles and has been made into toys, seen on clothing, and featured in a series of graphic novel collections. In 1991, Stan created Space Usagi, a series dealing with samurai in a futuristic setting, featuring the adventures of a descendant of the original Usagi. Additionally, Stan created Senso, set 15 years in the future, featuring an intriguing amalgamation of War of the Worlds meets Feudal Japan – where Martians attack Usagi and his friends in an all-out battle. Stan is also an award-winning letterer for his work on Sergio Aragonés’s Groo, working with Stan Lee for Spider-Man Sunday newspaper strips, and Usagi Yojimbo. Stan is the recipient of a Parents’ Choice Award, an Inkpot Award, an American Library Association Award, five Spanish Haxtur Awards, several Eisner Awards, and an Inkwell Award. In 2003 he won the prestigious National Cartoonists Society Award in the Comic Book division, and in 2011 Stan received the Cultural Ambassador Award from the Japanese American National Museum. In 2016, Stan became a multiple Harvey Award winner, winning one of the foundation’s highest honors for Best Cartoonist.