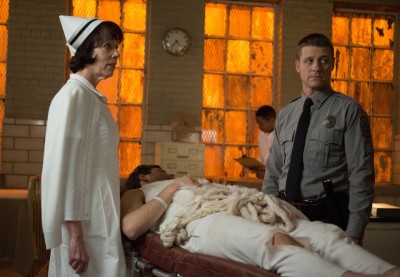 Rogues Gallery opens as the inmates of Arkham Asylum are putting on a show – a Shakespearean play that provokes one of the audience (also inmates) so deeply that he assaults an actor onstage.

The next day, the violent inmate, nicknamed The Frogman, is found in his cell – brain dead. Burns on his head suggest an overly enthusiastic attempt at shock therapy. Between the two incidents, Gordon (Ben McKenzie) finds himself facing dismissal – only saved by his having had the forethought to call in the police.

Detective Harvey Bullock (Donal Logue) arrives, at a most opportune moment, to pronounce this an official police investigation and taking Arkham’s head man, Dr. Lang () downtown for a ‘conversation.’

Meanwhile Oswald Cobblepot (Robin Lord Taylor), now referring to himself as The Penguin, finds himself in lockup following an ill-advised attempt to raise Don Maroni’s (David Zayas) taxes on the city’s fishermen, and Selina Kyle (Camren Bicondova) has found an ill Ivy (Clare Foley) and taken to Gordon’s empty condo. Also, Fish Moony (Jada Pinkett-Smith) has discovered an obstacle to her possible ascension to head of the city’s organized crime in the form of one of Falcone’s lieutenants, Ganza (Anthony Grasso) – but Butch (Drew Powell) says he’ll bring the uncooperative lieutenant around.

All of which leaves Gordon at Arkham to go through patients’ files and interrogations – which seem to lead nowhere – in spite of the help of dedicated nurse Dorothy Duncan (Allyce Beasley) and Dr. Leslie Thompkins (Morena Baccarin). 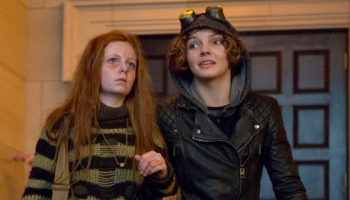 Among the inmates questioned are Aaron Helzinger (Kevin McCormick) – who killed his family with an axe – but has never hurt so much as a fly, before or since, and a politely menacing, bespectacled psychopath named Jack Gruber (Christopher Heyerdahl).

Writer Sue Chung and director Oz Scott have put together an episode that deepens the Gotham mythology by giving us a look inside Arkham and letting us see what it’s actually like – and it is every bit as unsettling as expected.

We’re given a look at what ambition can to – as well as the kind of consequences that can follow an action that is not well thought out. That can be a fatal experience in a place like Gotham City – and especially in a place like Arkham Asylum.

Baccarin is solid as Dr. Thompkins – a key player in the comics: one of the Batman’s most trusted allies – minor though her role might be here. Taylor continues to make Cobblepot a compelling loose cannon whose hubris sometimes gets the better of him.

Bicondova and Foley make an intriguing pair – Foley, in particular, stands out in her brief scenes for Ivy’s delightfully nasty sense of humor.

Whitlock’s somewhat officious Dr. Lang is a pencil pusher who has long since decided that rules must followed whether they’re appropriate or not – and finds being seriously understaffed to not be an excuse for Gordon’s inability to provide adequate security at Arkham. Whitlock nails the character perfectly.

Then there’s Christopher Heyerdahl. One of the busiest character actors around, Heyerdahl can play any kind of character – from out and out good guy to violent alien and every shade in between. Here, he does one of the things he does best – portray an almost fastidiously polite character while radiating all kinds of menace.

Jack Gruber may turn out to be one the Batman’s electrically-based villains, but, for me, at least, he looks an awful lot like Hugo Strange. It will be very interesting to see when/how/if Gruber reappears.

Gotham continues to impress, and Rogues Gallery sets up some interesting possibilities for the second half of the show’s premiere season.