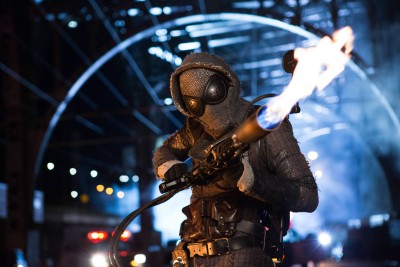 Since the beginning of season two, Gotham (FOX, Mondays, 8/7C) has been embracing its comic book origins in a way that has allowed its writers to go to weird places. Rise of the Villains: By Fire continues that trend. It’s approaching Frank Miller intensity (minus the rampant misogyny) in its gothic/noir sensibilities.

By Fire is the second half of the origin story of the Firefly – a female arsonist who once was a victim of abuse at the hands of her adoptive brothers, professional arsonists themselves. At the conclusion of part one of her story, Scarification, Bridgit Pike (Michelle Veintimilla) had gone from scared, battered and suffering to empowered and unexpectedly turned on by the power fire gave her. Now, as a number of arcs take shape, Bridgit – with the help of Selina (Camren Bicondova) – she is actively searching for a way to achieve complete freedom. 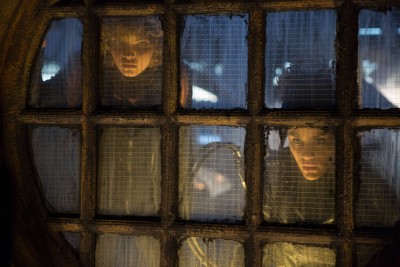 Written by Rebecca Perry Cutter, By Fire juggles a lot of plot arcs and encompasses a fair number of characters without making any of them seem like placeholders. T.J. Scott directs with an eye to balancing character beats with explosive (or should I say fiery) bursts of action.

Theo Galavan (James Frain) is particularly silky this week – his positioning himself in the mayoral race and his key conversation with Bruce show him feigning sincerity and earnestness as well as he’s ever done – and observant (he doesn’t… quite… buy Butch’s defection), too.

Gordon receives a bit of a shock from Barnes (Michael Chiklis) in relation to some of his tactics; Bullock (Donal Logue) is moved to think of barbecue, and Selena completely fails to convince anyone that she just doesn’t care.

Rise of the Villains: By Fire sows some intriguing seeds above and beyond the usual – and has a final scene that definitely qualifies as chilling. It’s a solid episode in what is becoming a pretty terrific season.