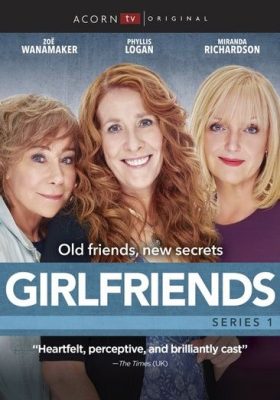 Girlfriends – the word usually calls to mind a group of girls/women in their teens to early twenties, despite the fact that it does, in fact, encompass all ages.

Girlfriends: Series One (now available on Acorn DVD) follows three women ‘of a certain age’ as their lives seem to be collapsing around them.

Linda (Phyliss Logan, Lovejoy, Downton Abbey), Gail (Zoë Wanamaker, Gormenghast, Agatha Christie’s Poirot) and Sue (Miranda Richardson, Harry Potter and the Goblet of fire) have been friends since their teens, though they haven’t always kept in touch as much as they’d like.

They come together for mutual support after a series of events put them in untenable situations.

While on a cruise celebrating ‘a big anniversary,’ Linda’s husband, Micky (Steve Evets, Rev., Pirates of the Caribbean: On Stranger Tides) falls overboard after returning to their cabin to get his reading glasses (they were dining at the Captain’s table and he couldn’t read the menu).

With Micky gone under mysterious circumstances (was he pushed? Did he slip and fall? Was it suicide?), Linda’s situation is perilous – it might take forever to get the insurance (or to find out she’s not getting it) and she needs the money to cover their mortgage. Also, one of the possibilities could lead to her being considered a murder suspect.

None of these possibilities hep her adult children, Ruby (Daisy Head), a dancer in one of the ship’s revues, or Ryan (Chris Fountain, Coronation Street, Hollyoaks), the head of entertainment on the ship.

Sue has just lost her job at Adorable – a bridal magazine owned by her lover, John (Anthony Head, Buffy the Vampire Slayer, Merlin) – despite having helped build the magazine from the ground up. In place of her job, she was offered a consultancy (a couple hours a week!).

Then there’s the situation with Sue’s son, Andrew (Philip Cumbus, Macbeth, The Importance of Being Earnest) – about which I will say no more.

Gail returns home after her part-time job as a crossing guard, to find her son Tom (Matthew Lewis, the Harry Potter films – he was Neville Longbottom) has been released from prison for good behavior but has a curfew.

She has also been looking after Tom’s son, Ben (Kobe Jerome) and trying to help look after mother, Edna (Valerie Lilley, Shameless: Original Recipe), who has been losing bits of herself as dementia sets in.

Girlfriends: Series 1 introduces all its mostly blue-collar characters in their most trying hours and then proceeds to put them through further hells.

They might not have been in touch as often as they’d have liked, but they are there to support each other now through trials like Linda being accosted by a wild-eyed wackadoo (Paula Wilcox) claiming that Mickey was going to leave Linda for her; Edna perhaps not being fit to cook up a bit of brekkie for Gail; Gail being divorced by Dave (Adrian Rawlins, Hard Sun, The White Princess) – despite still being in love with him, and the contentious relationship between Dave and Tom.

Creator/writer/director Kay Mellor (Playing the Field, Love, Lies and Records) sets up kind of backwards – we meet our characters in moments of crisis and then learn more about them – as people, as friends – as they encounter more and more problems.
This works – despite the seemingly endless trials they’re put through (if the Roadrunner was a soap opera that would be this) – because the deeper they fall, the more human and grounded they become.

The contrast between the S#!+storms they have to go through and their very grounded personalities and lives works because the writing is amazing, and Logan, Richardson and Wannamaker are just so damned good in the roles.

Also, Mellor – who directed three of the six episodes) and Dominic Leclerc (Shameless, Love, Lies and Records), who directed the other three, maintain a pace that just a bit quicker than deliberate – and exercise exquisite timing for the most dramatic (and humorous) bits.

They make the absolute most of each new, surprising moment.

Between the wonderful cast, terrific writing and exacting directions, Girlfriends: Series 1 is a very, very good drama about girlfriends of a certain age – that will entertain a discerning audience.
The DVD set is light on features with just a half-hour behind-the-scenes featurette and an eighteen-minute interview with three cast members.