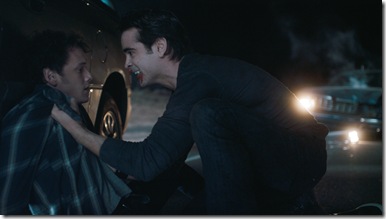 In Fright Night, a new neighbor, Jerry [Colin Farrell] attempts to get close to Charley Brewster’s [Anton Yelchin] mother, Jane [Toni Collette] by helping her with some yard work but that doesn’t earn points with Charley, who’s ticked off by the huge eyesore of a dumpster currently sitting in Jerry’s front yard.

The opening sequence establishes Jane as a single mom who doesn’t mind flirting with a good looking guy while establishing Charley as being, perhaps, a bit protective and maybe not quite as mature as he thinks he is.

When his friend Ed [Christopher Mintz-Plasse] tells him that Jerry is a vampire – responsible for the abrupt disappearance of at least two of their friends at school, Charley laughs him off [‘What kind of vampire name is Jerry?’]. Turns out Ed is right – he and Adam [Will Denton],one of the disappeared kids, shot video that shows Jerry in action… or rather, things that Jerry moved, while Jerry doesn’t register on the video.

That night, Charlie watches as Jerry brings home a girl named Doris – then leaves, minus Doris, a while later. In a moment of bravery, he breaks into Jerry’s house to free Doris – with unexpected results that convince him to warn his mom and his girlfriend, Amy [Imogen Poots] about the new neighbor.

Knowing he’s in over his head, he visits Peter Vincent [David Tennant], a Las Vegas showman who puts on a stage show about fighting vampires. Sadly, even though Vincent knows a lot about vampires, he’s also a vain, uncooperative tosser – though he eventually gets involved for a very good reason. Tennant steals every scene he’s in and with this cast, that’s not so easy to do. 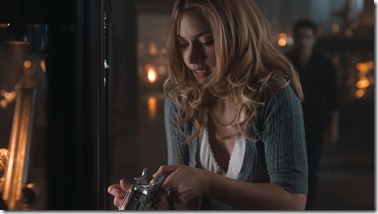 With young Yelchin and Poots giving it a solid grounding, and Farrell chewing the scenery [and his victims] with a ferocious abandon, Fright Night is, in fact, that rare remake that matches the original. While Charley has to overcome his fear and step up, Amy is not the usual damsel in distress – even after she is.

The script, by Marti Noxon [best known the TV series Buffy, the Vampire Slayer] reworking the story by Tom Holland [writer of the original movie], is laced with action, gore and humor; with more emphasis on the action and humor – and just enough gore, at just the right moments, to give it maximum effect.

Noxon’s Jerry isn’t as sly and playful as Holland’s original, but he’s smarter and nastier – as shown by his unique and, within the parameters of the film’s logic, completely sensible method of voiding the necessity of being invited into the Brewsters’ home. He knows when subtlety needs to take a backseat to brute force and attitude.

Another good touch is setting the movie is an isolated suburb of Las Vegas – a city known for its transient population. People are always leaving without explanation. It’s just too bad that Ed and the no-longer-with-us Ed did notice.

Craig Gillespie gives us just enough time to get a feel for the main characters before launching into a whirlwind of mayhem. Despite the 3D being very good, though, Gillespie doesn’t make as much use of it as you might expect, so when he does, it’s good for a real jolt. Plus, he has some very well staged action sequences and a genuinely unusual car chase.

Chris Sarandon, the original Jerry, gets a cameo as an unlucky driver who has the misfortune to encounter Jerry on the stretch of road that connects the Brewsters’ suburb to Las Vegas proper. It’s a fitting bit of business that provides the first look at the fully transformed Jerry – one of the best of the 3D bits.

Fright Night does get to be a bit overbearing towards the end [it could have been cut by maybe five minutes and been just as effective], but it’s smarter and wittier than I was expecting – and the balance of chills and jumps to laughs both cheap and earned is close to perfect.