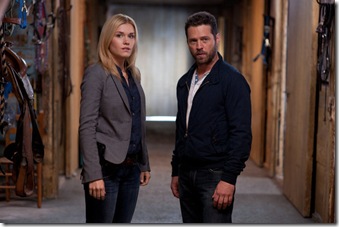 It’s strange – even the worst television series seem to be more entertaining when they do a Groundhog Day episode. Which makes it inevitable that a good and continually improving series like Syfy’s Haven [Fridays, 10/9C] would produce a really good one.

Audrey Parker’s Day Off opens with Chris awakening Audrey with a kiss – very Prince Charming-like. It’s her day off and the instant she finishes an official errand [talking at Career Day at Haven’s grade school] she’ll be all his. Of course, nothing ever works out the way it should in Haven and so a hit and run accident sets off a series of Groundhog Day replays for Audrey.

The one other thing that Audrey Parker‘s Day Off has in common with Nathan’s ‘second-favorite Bill Murray movie’ is love. No matter what she does, though, Audrey can’t seem to figure out what’s causing the repeating hit and run.

Repeating elements include the actual hit and run [though it’s not always the same car], a man with OCD, a jogger, a bare-headed kid on a bike and a pair of green, child’s running shoes – and Audrey’s not being able to go on Chris’ surprise picnic…

Meanwhile, Duke [Eric Balfour] is having Taco Tuesday at The Grey Gull – and not enjoying having to do payroll, or Audrey’s being late with the rent. His love of waffles provides an oddball kind of comic relief.

Audrey Parker’s Day Off was written by Nora Zuckerman & Lilla Zuckerman who really find some interesting ways to vary Audrey’s repeating day. It was directed by Fred Gerber who makes the town of Haven creepier than usual and moves things along in a deliberate manner – delicately balancing character beats against Audrey’s increasing horror [especially in one specific variation] – and fear that she’s not going to be able figure this new trouble out.

This week’s episode shows that you don’t need a lot of blood to create genuinely scary moments and an overarching aura of dread.

Photo by Michael Tompkins/courtesy of Syfy