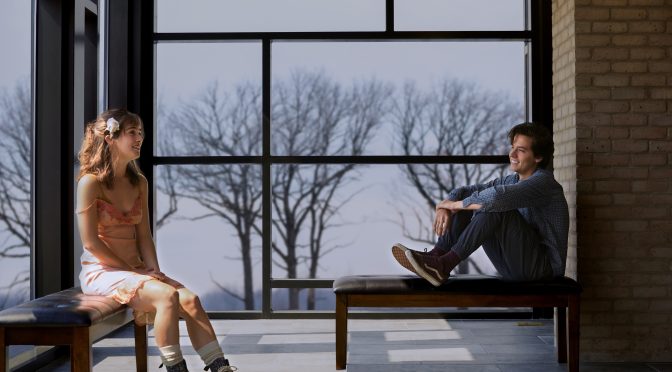 What they have in common is cystic fibrosis – they can’t get closer than six feet apart for fear of their particular bacteria making them even sicker than they are. His is a type of bacteria than prevents him from ever having a lung transplant, while she’s on a shortlist for a transplant.

They meet cute after Stella stops in front of Will’s room because he has visitors he’s about to allow have sex in his room. Appalled, she heads to the maternity ward, a place where she always finds peace (the creation of new life helps her deal with a potentially very limited lifespan).

A key component of the film is her vlog about the ins and out of CF – where we also learn about her sister, Abby (Sophia Bernard) and a kind of tradition they have for when Stella has surgery.

There’s also a gay best friend, Poe (Moises Arias, Pitch Perfect 3) – but they’ve best friends since well before he realized his sexual identity. So, not the token Gay Best Friend merely to be inclusive.

Poe’s a skater with a distressing habit of breaking with all his boyfriends – the one thing about him that pisses Stella off.
Richardson, Sprouse and Arias bring Stella, Will and Poe to vivid life.

They are all real kids with strengths and flaws – and they find what they’re missing in each other.

Even then, they’re not – they still do things that piss each other off and sulk or throw tantrums just like anyone else.

The film’s title comes from Stella taking a small step towards revolution by cheating, by one foot, their safe distance so that she and Will can be closer.

That small step leads to a giant leap in the final third of the film – an act that forces Will to do something unthinkable. An act that will lead a real sacrifice.

Working from a script by Mikki Daughtry and Tobias Iconis, Justin Baldoni (best known for playing Raphael on Jane the Virgin) directs with a simplicity and clear-headedness that lets his stars be the kids they are playing.

The result is that Stella and Will are wise beyond their years nor stupid. They exhibit moments of both ends of that spectrum and a whole range of emotions to surround and support them.

While veteran talents Parminder Nagra and Claire Forlani provide a bit of genuine gravitas in key roles, Kimberly Hebert Gregory, as nurse Barb, is funny and poignant as she refuses to let those two crazy kids die on her watch.

Richardson, though, is brilliant as Stella. She lets the audience know that Stella has fallen for Will even before Stella knows it. Further, we see the moment when Stella actually realizes she’s in love with Will – and it’s a powerful scene.

In spite of the fact that Five Feet Apart follows a particular formula it is an example of how formula can be tweaked with wit and nuance to good effect (it doesn’t hurt to have an incredibly good cast, either).