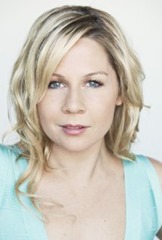 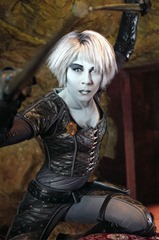 In what has to be a case of perfect casting, Syfy has signed Farscape’s Gigi Edgley to host Jim Henson’s Creature Challenge. The new competition series pits challengers against each other in producing original creature effects in hopes of earning a position with Jim Henson’s Creature Shop.

As host of the series, Edgley is charged with introducing each week’s challenge to the group of contestants.  The Australian actress has a long and rich history with The Jim Henson Company, beginning with her popular role as Chiana on the Company’s critically-acclaimed sci-fi cult series, Farscape, in which she starred for over four years.  The beloved role was the catapult for Edgley’s huge online presence and large following of fans. Additionally, Edgley has appeared in countless film and television series including the ABC miniseries Carlotta and USA’s The Starter Wife.  She also starred on one of Australia’s most popular and respected series, The Secret Life of Us. Edgley is a singer and a creator of original comic books and earned a Bachelor of Arts degree from the Queensland University of Technology.

Syfy also finalizes the series judges with the additions of creature fabricator Beth Hathaway and creature designer Kirk Thatcher to the panel, who each week will critique the original creatures and decide the fate of the contestants.

Beth Hathaway has fabricated specialty creatures and costumes for film and television for over 25 years.  With over 100 credits to her resume, Hathaway’s first big break came when she landed a job at Stan Winston Studio.  In her ten years with the studio, she mastered the craft of assembling creatures and worked on high profile projects like Steven Spielberg’s Jurassic Park, Tim Burton’s Edward Scissorhands and James Cameron’s Terminator 2: Judgment Day.  For the last ten years, Hathaway has led the fabrication department at K.N.B. EFX Group working on projects like The Walking Dead and The Lion, The Witch and The Wardrobe.

Kirk Thatcher is an Emmy-award winning writer/producer, a Webby award-winning director, and a production designer with a penchant for special effects, strange creatures, and comedic characters. Thatcher began his career at age 19, working at George Lucas’s Industrial Light and Magic, building and performing creatures for films like Return of the Jedi, E.T., Star Trek II: The Wrath of Khan and Gremlins. He co-produced the series Dinosaurs, designing most of the characters and working closely with one of his mentors, Jim Henson.  He also co-wrote Muppet Treasure Island, and directed television features The Muppets Wizard of Oz, It’s A Very Merry Muppet Christmas Movie and A Muppets Christmas: Letters to Santa. Kirk also directed multiple Muppet online videos, including the wildly popular The Muppets: Bohemian Rhapsody.

Brian Henson will headline and lead the panel of judges on the series. Henson is the Chairman of The Henson Company and oversees the groundbreaking work of Jim Henson’s Creature Shop. An award-winning writer, director and producer, he is also a creature designer and performer taught by the iconic genius, his father Jim Henson.

Serving as mentors on the series will be world-renowned designer Peter Brooke, mechanization and animatronics master John Criswell and fabrication and artistic specialist Julie Zobel.  The three are longtime Creature Shop artists who have dedicated their talents to the Henson legacy. Their tenures with The Jim Henson Company span decades and they bring a specialized knowledge having collaborated directly with Jim Henson himself.  Working alongside the creature creators inside their workplace at the Creature Shop, they will be available for consultation and hands-on assistance.

Jim Henson’s Creature Shop Challenge will feature ten aspiring creature creators competing in a series of challenges where they will build everything from mechanical characters to whimsical beasts, bringing high-end creature designs to life.   The contestants compete for a prize worth $100,000 including the opportunity for the job of a lifetime – a contract working at the world-renowned Jim Henson’s Creature Shop™.

Jim Henson’s Creature Shop™ provides performed digital visual effects, animatronic creatures, animation and soft puppets to the international film, television and advertising industries. Based in Los Angeles and New York with satellite shop capabilities internationally, the Shop is known for designing and building some of the world’s best-known characters including the Sesame Street puppets, the classic Muppets, the dinosaurs from Dinosaurs, the aliens from Farscape and the fantastical creatures from The Dark Crystal and Labyrinth. Other features credits include Where the Wild Things Are, Forgetting Sarah Marshall, Hitchhiker’s Guide to the Galaxy, and Five Children and It. The shop is also known for its live performance work with artists like Cee Lo Green, Kanye West, Lady Gaga and Deadmau5.  A recipient of more than 9 Emmy Awards for its outstanding work building puppets for Sesame Street, the Shop also received an Academy Award for its visual effects work on the film Babe. Other awards include a Scientific and Engineering Academy Award for the Henson Performance Control System, a powerful custom-based interface for puppeteers, and an Emmy Award for its work in developing the Henson Digital Performance Studio, a patented control system technology that enables puppeteers to physically perform a computer generated (CG) character in real time.

The Jim Henson Company has remained an established leader in family entertainment for over 50 years and is recognized worldwide as an innovator in puppetry, animatronics and digital animation. Best known as creators of the world famous Muppets, Henson has received over 50 Emmy Awards and nine Grammy Awards. Recent credits include the Emmy® nominated Sid the Science Kid, Dinosaur Train, and Pajanimals as well as the new series Doozers, a CG animated preschool series. Features include The Dark Crystal, Labyrinth, MirrorMask, and the upcoming Alexander and the Terrible Horrible No Good Very Bad Day and television productions include Fraggle Rock and the sci-fi cult series Farscape.

With additional locations in New York and London, The Jim Henson Company is headquartered in Los Angeles on the historic Charlie Chaplin lot, complete with soundstage and postproduction facilities.  Independently owned and operated by the five adult children of founder Jim Henson, the Company is also home to Jim Henson’s Creature Shop™, a pre-eminent character-building and visual effects group with international film, television, theme park and advertising clients, as well as Henson Recording Studios, one of the music industry’s top recording facilities known for its world-class blend of state-of-the-art and vintage equipment. The Company’s Henson Alternative brand is currently touring “Puppet-Up! – Uncensored,” a live puppet improvisational show.