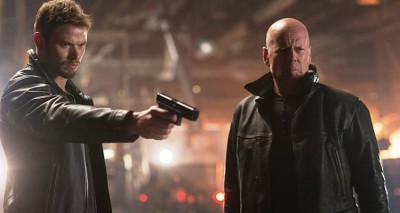 Extraction is a short but not quite sweet spy tale in which a super-hacking device called the Condor is the McGuffin. Basically, it can hack any government’s communications and/or anything that relies on computers – which is pretty much everything these days.

The Condor is actually a device to allow an over the hill CIA agent to extract vengeance for the betrayal that cost his wife’s death.

Extraction opens with Leonard Turner (Bruce Willis) about to be tortured (somehow, his captors know he’s a CIA agent) but he pulls off a classic Bruce Willis escape – unfortunately, not before his wife is killed. The timely arrival of his colleague, Ken (D.B. Sweeney) prevents Turner’s son, Harry, from suffering the same fate.

Cut to ten years later and Harry (Kellan Lutz) is a CIA analyst trying to track down terrorists hoping to steal the aforementioned Condor. His scant information isn’t enough to persuade Ken Robertson, his boss now, from moving on it.

Meanwhile, Ken has sent Leonard on a mission that is foiled once again – leaving Leonard tied to a chair and passing along his kidnappers’ demands.

Agent-in-Charge Citizen (Christopher Rob Bowe) refuses to let Harry in on the mission to retrieve the Condor and save Leonard, so Harry takes things into his own hands – which leads him to Newark, New Jersey and finding Agent Victoria Fair on the job. They have a history.

Before long, Harry and Victoria have taken his bit of information and followed it up a chain of command – following the requisite biker bar brawl and a bit of nightclubbing – to a less than satisfactory conclusion.

There are, of course, red herrings, double-crosses and the usual spy games present in Extraction. It’s fun to see Willis as the character that needs to be rescued; the bar brawl is notable for some creative use of billiard balls, and the betrayal that set things in motion plays out almost satisfactorily.

Steven C. Miller directs from a script by Max Adams and Umair Aleem – and he keeps moving quickly enough that if we blink at just the right moments the implausibilities and plot holes might slip by before we notice.

Lutz and Carano have great chemistry and their fight scenes are what work the best here. They also highlight one of the film’s biggest problems: Agent Fair is pushed around too easily – usually on the heels of kicking some@$$. She’s a feisty action hero when she needs to be and a damsel in distress when she needs to be. That’s a huge disservice to someone who is actually more capable than everyone else in the movie.

It’s possible that Lutz might have a career as an action hero, but a great thespian he is not. He certainly has the moves, as required, though.

Willis has been better in roles he phoned in. Here he just seems weary and killing time until it’s time to go home – or maybe he was underplaying to the point of woodenness to make his co-stars look good. (It’s one theory.)

Summer Altice (as Victoria’s party girl friend) and Steve Coulter (Agent-in-Charge Sitterson) are wasted – along with a large cast that has very little to do.

There are movies you love; movies you like; and movies you want to love and leaving aside movies you hate, Extraction is more a disappointment than a total drag – but you know it’s not a Good Thing when its running time of 82 minutes feels longer.