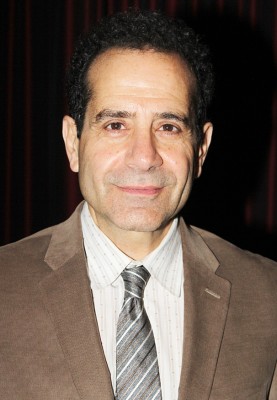 Tony Shalhoub – three-time winner of the Primetime Emmy Award for his portrayal of Adrian Monk on the long-running USA Network hit Monk – has joined the cast of CBS’ upcoming summer comic-thriller, BrainDead.

BrainDead comes from The Good Wife creators, Robert and Michell King. It is set to premiere this summer. For further details, follow the jump.

NEW YORK – Feb. 4, 2016 – Golden Globe and Emmy Award-winning actor Tony Shalhoub has joined the cast of “BrainDead,” a new comic-thriller set in the world of Washington, D.C. politics, to be broadcast in summer 2016.  The series comes from Robert and Michelle King, creators and executive producers of “The Good Wife.”

Shalhoub will play Red Wheatus, a hard-drinking, fun-loving Republican senator who has spent decades in Washington making deals, until a radical transformation turns him into a health-conscious extremist who would rather destroy the government than compromise.

“We’re thrilled that Tony Shalhoub will be joining ‘BrainDead,’” said executive producers Robert and Michelle King. “He’s funny, dramatic, subtle, and broad when he needs to be. To our minds, he can play anything. We were thinking of making the character a 12-year-old blind girl hunting for her mother in Belgium to see what he did with that.”

Tony Shalhoub is well known for his starring role as the obsessive-compulsive detective Adrian Monk in the popular television series “Monk,” for which he won a Golden Globe Award and three Primetime Emmy Awards. His additional television credits include “Nurse Jackie,” “Too Big to Fail” and “Wings.” Shalhoub’s feature film credits include “Big Night,” “The Siege,” “Galaxy Quest,” “Men in Black,” “Men in Black II,” “Pain & Gain,” and the voice of Luigi in the popular animated movies “Cars” and “Cars II.” He appeared in the theatrical productions of “Act One” and “Golden Boy” on Broadway, receiving Tony Award nominations for both.

As previously announced, Mary Elizabeth Winstead will star as Laurel, a young, fresh-faced Hill staffer whose first job in Washington, D.C. leads her to discover two things: The government has stopped working, and alien spawn have come to earth and eaten the brains of a growing number of Congressmen and Hill staffers. Also, Aaron Tveit will play Gareth, the Legislative Director to a top Republican senator, who is smart, hard-working, and ultimately responsible for helping to save the world. Danny Pino will portray Luke, Laurel’s older brother, the Democratic Whip Senator from Maryland, and Tony Award-winning actress Nikki M. James will play Rochelle, a medical resident whose father dies as the result of a mysterious infection. She and Laurel team up to learn what happened to her father, and protect others from the same fate.