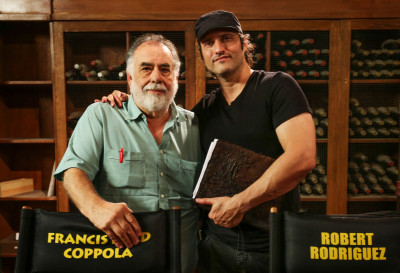 One of the perks of having your own network has to be having the opportunity to share conversations with your colleagues – especially when your colleagues in giants of film like Francis Ford Coppola.

On Monday, March 2 (8/7C), Robert Rodriguez will be hosting Coppola on El Rey Netowrk Presents: The Director’s Chair – following which, the network will air Coppola’s The Conversation. Details follow the jump.

In this candid and insightful interview, Rodriguez and Coppola discuss Coppola’s epic career tracing his early filmmaking inspirations back to childhood. Never before has a filmmaker in the history of the medium had a streak of masterpiece-level films that Francis Ford Coppola enjoyed between The Godfather and Apocalypse Now. Part of the New Hollywood wave of filmmaking auteurs that anointed kingly status to the director, Coppola was able to work within the studio system though not without his own challenges. In the interview, Coppola discusses his surprising reluctance to do both The Godfather and The Godfather: Part IIas well as providing new insight into the well documented struggles on Apocalypse Now, which resulted in arguably the greatest war film of all time.

The Conversation Monday, March 2 at 9:00pm

Coppola, who believes in making “one film for them and one film for me,” made this film featuring a paranoid, secretive surveillance expert in between The Godfather and The Godfather: Part 2.  One of the great 70s-era paranoia thrillers, The Conversation stars Gene Hackman and features John Cazale, Allen Garfield, Frederic Forrest, Cindy Williams, Harrison Ford, Teri Garr and Robert Duvall. The psychological thriller revolving around the moral dilemma a surveillance expert faces when his recordings reveal a potential murder was written, produced and directed by Coppola. The film won the Palme d’Or at the 1974 Cannes Film Festival and was nominated for three Academy Awards.  The film lost the top prize to Coppola’s The Godfather: Part II at the 1974 Academy Awards, marking the only time in history that a single person credited as producer & director had two films in the Best Picture category.

“El Rey Network Presents: The Director’s Chair” is a series of hour-long specials featuring the industry’s most cutting edge directors as they engage in a revealing and unexpected exchange about the world of filmmaking. The series provides access to one-on-one interviews between Rodriguez and some of cinema’s most iconic filmmakers.

To find El Rey Network in your area please check out the channel finder at bit.ly/WatchERN