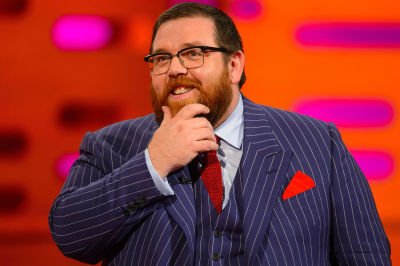 Whovians are getting quite the Christmas prezzy this year – Nick Frost has signed on to guest-star in the annual Doctor Who Christmas Special.

Details follow the jump. Unlike a lot of seasonal specials, BBC America’s Doctor Who Christmas Special will actually air on Christmas Day.

Production on 2014’s Doctor Who Christmas episode has begun, with a host of British acting talent set to appear.  The Doctor Who Christmas special, a cracker of a highlight in the festive season’s schedule, will air Christmas Day on BBC AMERICA and promises to be an action-packed adventure.

Nick Frost, actor and screen writer, has starred in numerous hit film and television roles, including Spaced, The World’s End, Shaun of The Dead, Hot Fuzz, Cuban Fury and Paul, which he also wrote.

Nick comments: “I’m so thrilled to have been asked to guest in the Doctor Who Christmas special, I’m such a fan of the show. The read-through was very difficult for me; I wanted to keep stuffing my fingers into my ears and scream “No spoilers!” Every day on set I’ve had to silence my internal fan boy squeals!”

Michael Troughton (Breathless, The New Statesman), who has recently returned to acting, will follow in his father’s footsteps by appearing in Doctor Who. His father, Patrick Troughton, played the second incarnation of the Doctor.

Steven Moffat, lead writer and executive producer, says: “Frost at Christmas – it just makes sense! I worked with Nick on the Tintin movie many years ago and it’s a real pleasure to lure him back to television for a ride on the TARDIS.”

The Doctor Who Christmas special will air on BBC AMERICA. Written by Steven Moffat and directed by Paul Wilmshurst (Strike Back, Combat Kids), it will be shot in Cardiff at BBC Wales Roath Lock Studios.