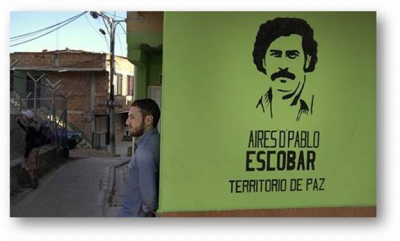 At one time Pablo Escobar — the most wanted man on the planet — buried masses of his estimated multi-billion-dollar fortune all over Colombia.  Legends say the vast majority of it has never been found.

(LOS ANGELES) – At one time Pablo Escobar — the most wanted man on the planet — buried masses of his estimated multi-billion-dollar fortune all over Colombia.  Legends say the vast majority of it has never been found.  With never-before-granted access and permission in Colombia, two former intelligence officers armed with the skills and training from 10 years of work in the CIA go on the hunt for the alleged hidden treasure in this all-new series. Discovery’s brand-new series, FINDING ESCOBAR’S MILLIONS, premieres Friday, November 3 at 10 pm ET/PT.

Doug Laux and Ben Smith, former CIA operations officers who served multiple tours throughout the Middle East, work with the original DEA agents that handled the case to infiltrate Escobar’s inner circle in search of the cash. This elite team uses unprecedented access to technology and numerous inside sources to scour Colombia for the money.

Doug and Ben first set their sights on Barrio Escobar, a former trash dump that the drug lord transformed into a neighborhood, providing housing for the poor and homeless during his reign. To this day, Pablo Escobar is highly regarded in the neighborhood, and the residents continue to be loyal to his legacy. Doug and Ben connect with a local and make their way inside the Barrio in an all-out search for Escobar’s cash, but curiosity from area residents forces them to scale back their investigation. Throughout the season, Doug and Ben scour Colombia for clues Escobar left behind, but will the two former operatives uncover Escobar’s fortune and secrets, or will they come up empty-handed?

Discovery Channel is dedicated to creating the highest quality non-fiction content that informs and entertains its consumers about the world in all its wonder, diversity and amazement. The network, which is distributed to 100.8 million U.S. homes, can be seen in 224 countries and territories, offering a signature mix of compelling, high-end production values and vivid cinematography across genres including, science and technology, exploration, adventure, history and in-depth, behind-the-scenes glimpses at the people, places and organizations that shape and share our world. For more information please visit www.discovery.com.