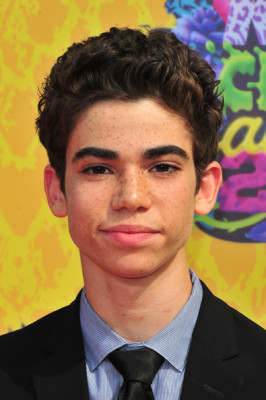 Wouldn’t it be great if we could use our video gaming skills to surmount – or at least circumvent – challenges in real life?

Disney XD has just greenlit a live-action series called Gamer’s Guide To Pretty Much Everything in which 15-year old Conor is forced to attend high school after a thumb injury takes him out of the fast-paced, supercharged world of the professional gaming circuit.

As a coping mechanism, he begins to visualize his life as a videogame and begins applying his experience as a gamer to his new real life situation.

Gamer’s Guide To Pretty Much Everything stars Cameron Boyce as Conor. For further details, follow the jump.

Disney XD has ordered “Gamer’s Guide to Pretty Much Everything,” a new live-action comedy series starring the popular Disney Channel star Cameron Boyce of the hit series “Jessie” and the upcoming movie event Disney’s “Descendants.” The series, which centers on a teenage professional video game player who circumvents life’s challenges using his gaming acumen, will begin production in Los Angeles this spring for a summer 2015 premiere on Disney XD. The announcement was made today by Adam Bonnett, Executive Vice President, Original Programming, Disney Channels Worldwide.

Bonnett said, “With the popularity of video games and electronic sports, we’re thrilled to give our audience a new series that spotlights one of their biggest passions and features fan-favorite star Cameron Boyce.”  He added, “We are bringing the video game universe to life and giving our popular multi-camera series a fresh, new twist by integrating gaming visual effects into each episode.”

Conor (Cameron Boyce), a 15-year-old video game phenom, is forced to attend high school for the first time after a thumb injury sidelines him from the glamorous pro gaming circuit. As a coping mechanism, he begins to visualize life as a video game. He is reunited with his three former gamer friends who he left behind for life on the pro circuit World Tour, and he quickly realizes that restoring his friendships is vital in his quest to “level up” to his former glory.

Starring alongside Boyce as Conor’s friends are Murray Rundus (“Dear Eleanor”) as Wendell, Felix Avitia (“I Didn’t Do It”) as Franklin and newcomer Sophie Reynolds as Ashley.

The series was created by Devin Bunje & Nick Stanton (“Zeke & Luther,” “Turbo Fast”), who also serve as executive producers. Jim O’Doherty (“Grounded for Life,” “3rd Rock from the Sun,” “Kickin’ It”) is executive producing and will serve as showrunner of the series.