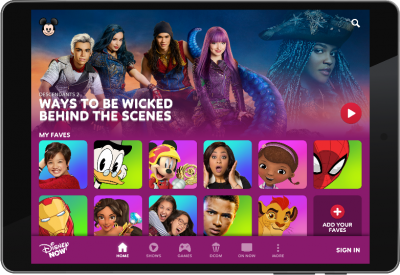 The DisneyNOW app provides access to episodes of the three channels’ shows – including in-season stacking for current shows; sixty games, and personalization options.

DisneyNOW Offers Full Episodes of Current Seasons, Customization and Personalization for All Viewers, plus Live Streaming and Next Day On-Demand Access for Viewers Who Authenticate With an MVPD Partner

Three popular Disney Channel-branded WATCH apps for kids age 2-14 – downloaded more than 40 million times since 2012 – have been consolidated into one newly branded DisneyNOW app that upgrades the user experience with customizable and personalized functionality while continuing to provide an extensive array of series, television movies and other entertainment content from Disney Channel, Disney XD, Disney Junior and Radio Disney. Like the WATCH streaming apps, access to full episodes and live streaming of Disney Channel, Disney Junior and Disney XD continues to be available when viewers authenticate via their participating cable, satellite or digital programming distributor. Each network also offers a selection of full episodes to fans without signing in.

DisneyNOW is available today, THURSDAY, SEPTEMBER 28, on iOS, tvOS, Android/Kindle and Roku. Fire TV, Android TV and the Web will launch in 2018.

Showcased last February during Disney Media Sales’ presentation to clients, the DisneyNOW app is designed to satisfy viewers’ demand for more content, easier access, more control, including Disney Junior Only Mode, and more “Disney magic,” including personalization that’s so crucial for kids – all in one app. Customized sponsorship opportunities offer clients a variety of ways, including sweepstakes and interactive video advertisements, to engage with consumers. Disney Channel launched its suite of Apps (branded WATCH) in 2012 and was the first entertainment network to launch products that provide pay TV subscribers access to live, linear network streams as well as on-demand episodes.

Kimberly Hicks, vice president, Digital Media, Disney Channels, said, “The decision to consolidate our Disney Channel ‘Watch’ apps into the new DisneyNOW app was driven by what kids told us they want in a video experience. The upgraded app enables us to showcase great stories and characters, and bring the magic of Disney Channel, Disney XD and Disney Junior to their daily lives.”

DisneyNOW invites each family member to create a profile and express themselves with a Disney Emoji avatar – a selection of more than 180 heritage and new character poses at launch. On return visits, users can select their profile to resume watching where they left off or watch new episodes of their favorite shows.

The new app will also include more than 60 games and activities including “DuckTales” adventure game “Duckburg Quest,” Princess Elena of Avalor in “Flight of the Jaquins” or the Villain Kids in the “Descendants 2 Wicked Style” activity. New games will be added to DisneyNOW every month.

DisneyNOW will also feature Disney Channel Original Movies – curated from over 100 titles – and the first presentation of some of the most anticipated programming including (available now or on the date specified below):

Disney Channels Worldwide is a global portfolio of 120 kid-driven, family-inclusive entertainment channels and/or channel feeds available in 162 countries/territories, in 34 languages. The platform brands are Disney Channel, Disney XD, Disney Junior, Disney Cinemagic, Disney Cinema, Hungama, Dlife and Radio Disney Networks. Disney Channel content is distributed through cable, satellite and digital terrestrial television channels, and via a strategic partnership with Disney Media Distribution to third-party broadcasters across the globe. In the U.S., fans can access full episodes on desktop, mobile and connected TV devices via Disney Channel, Disney XD and Disney Junior apps. Live, linear feeds and exclusive window programming are also available on these apps for viewers who sign in with a participating pay TV provider. Disney Channel properties continue to rapidly expand into new markets across the world, playing a key role in introducing the Disney brand to nearly 515 million viewers worldwide.

*COPYRIGHT ©2017 Disney Enterprises, Inc. All photography is copyrighted material and is for editorial use only. Images are not to be archived, altered, duplicated, resold, retransmitted or used for any other purposes without written permission of Disney|ABC. Images are distributed to the press in order to publicize current programming. Any other usage must be licensed. Photos posted for Web use must be at the low resolution of 72dpi, no larger than 2×3 in size.