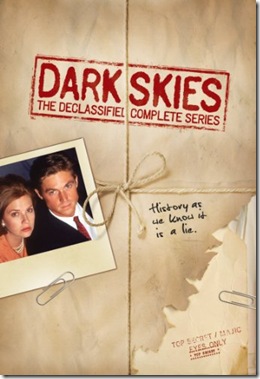 Dark Skies had the misfortune to run during the time The X-Files was at its peak. As a result, X-Files fans ignored it and others feared it was a rip-off of the Chris Carter series. Instead, it was first [and sadly only] season of a five-year arc that put an unusual twist on history – from the famed Roswell crash through the Gary Powers spy plane incident and the arrival of The Beatles – even further, through the assassination of JFK and even The Summer of Love, Dark Skies treated us to alternate history that had depth, weight and emotional resonance.

When congressional aide John Loengard [Eric Close] and his fiancée Kim Sayles [Megan Ward] arrived in Washington, DC in the summer of 1961, they were fresh, young, naïve and ecstatically happy. While John worked in the office of his home state’s congressman, Kim found work in the office of the First Lady, Jackie Kennedy. Then, John was asked to check out a number of possibilities for cutting funding – one of which was Project Blue Book [investigation of UFO sightings and abductions].

As he was returning from the assignment, he was ambushed by a group of men who warned him to lay off Project Blue Book and that this meeting had never happened. Scared, but not intimidated, John was able to find Majestic-12, a government agency so covert that the President of the United States was considered not to ‘need to know.’ Their purview? Covering up the existence of UFOs and an alien threat that threatened the entire world.

Headed by Captain Frank Bach [J.T. Walsh] and his fiery head of security, Phil Albano [Conor Farrell], Majestic-12 obtained funding by skimming from the defense budget, which eventually led to the ‘police action’ in Viet Nam. John soon found himself working for Majestic-12, but Bach’s abuses of his power led to him going on the road with Kim, trying to expose the threat to the world.

Because of the nature of the aliens’ plan to take over the planet – by attaching themselves to individual human beings until everyone was a member of a universal Hive – it was natural to discover that the Hive had infiltrated the police, the armed forces, the government and even Majestic-12. When he was discovered, he found a way to escape, becoming even more of a threat. The Hive even got right next to John – in a most unexpected manner. 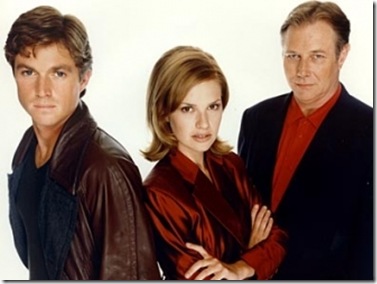 In some ways, Dark Skies resembled The Invaders, though it took two seasons for David Vincent to drum up enough regular help in his fight to expose his aliens. Dark Skies, alas, didn’t get to a second season.

What it did do was take John and Kim through a journey that spanned six years, and involved well-known persons and events of the time period. The Beatles’ first appearance on The Ed Sullivan Show [the most watched television program in history to that point]; a film school student named Jim Morrison [Brent David Fraser]; the alleged suicide of game show host Dorothy Kilgallen [Marilyn McIntyre], and even a bit of the philosophy of Timothy Leary [Don Most] found their way into the series – in every case, taking history and giving it a new wrinkle.

Most episodes were extremely good – several were among the best aired on television that season – but some, like The Last Wave, faltered because the writers went for running gags that were out of place [once you know the film school student is Jim Morrison, you don’t need to hear future Doors’ song titles as part of his dialogue – well, beyond ‘Those people are strange, at least].

One of the best eps, The Warren Omission, introduced Juliet Stewart [Jeri Lynn Ryan], who attempts to intimidate John enough to keep him from testifying before The Warren Commission. Stewart became a regular for the rest of the series and had a compelling backstory that was explored in following ep, White Rabbit, which found John coerces into going into Viet Nam to retrieve [or destroy] wreckage of an alien ship that the Russians had shot down, and Strangers in the Night, in which Aura-Z, the soviet equivalent of Majestic-12, was infiltrated by aliens and John, Juliet, Major Colin Powell and Majestic’s resident scientist, Dr. Halligan [Charley Lang]were sent to obtain [or destroy] all the data in the facility.

Throughout, though, John and Kim had to deal with everyday problems – like places to stay, transportation and income. There was even the possibility of starting a family. Against the backdrop of the alien invasion, the day to day struggles of the couple gave the series added depth and made the show surprisingly relatable.

Creators Bryce Zabel and Brent V. Friedman put together a plan that resulted in a series that, unlike The X-Files, was always well grounded in human behavior and followed a definite constructed history that reached back in time for thousands of years [a Tlingit legend plays a role in Ancient Future] and several years into the future. As you watch the nineteen episodes [including the double-length premiere, The Awakening] that were shot, you will see that the various plot arcs do, in fact, build and sustain each other. Dark Skies was a well constructed universe and it’s a shame that we never got to see more of it.

Features include: two Audio Commentaries [an excellent one by Zabel, Friedman, Close & Ward for The Awakening; a less wonderful by the same four for the series finale, bloodlines]; the International Pilot [which had some noticeable changes including Majestic-12’s operatives as Men in Black]; Signal To Noise: Uncovering Dark Skies – The Origin, The Cast and The Production & Legacy [3-part look back at the series by Zabel, Friedman, Close and Ward]; The Dark Skies Glossary [explanations of Majestic-12 jargon]; Original Sales Presentation; Original EPK [Electronic Press Kit]; Season Two Proposal, and Network Promos. Also included is a 12-page booklet, Project: Dark Skies, in which Bryce Zabel discusses the rationale behind the series and the show’s journey from series to DVD.