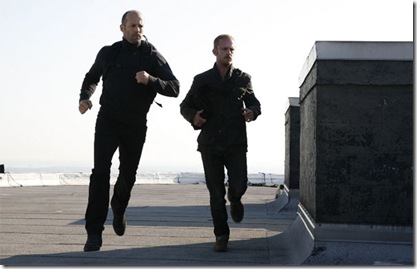 The Mechanic is an updated take on the Charles Bronson film of the same name. It is beautifully and, frequently, elegantly shot and mixes enough father/son dynamics that, with a bit of imagination, elements of Hamlet can be seen in it. That, the intriguing take on a mentor/apprentice approach to revenge flicks, and the presence of stalwart Jason Statham and the brilliant Ben Foster are enough to warrant checking it out – though it isn’t quite the classic it could’ve been.

Arthur Bishop [Statham] is the kind of hitman, or mechanic, who can tailor an assignment [as he refers to his efforts] to any requirement: invisible [as we see in the film’s opening moment], nasty [to make a point], or any shading in between. He has a kind of surrogate father/son relationship with aging retired mechanic Henry McKenna [Donald Sutherland], and takes his ‘assignments’ from an executive-suited Dean [Tony Goldwyn].

When Dean manipulates him into doing something that tweaks his conscience back to life, he takes on McKenna ‘disappointment’ of a son, Steve [Foster] as an apprentice. The wildly impetuous Steve learns the mechanics [ahem!] of the trade but not the nuances and ignores Bishop’s instructions on his first assignment – a gay hitman with a love of chihuahuas and much younger men – resulting in a huge mess. When Bishop learns of Dean’s duplicity, he seeks vengeance – not knowing that Steve has figured out some important details as well.

Simon West has been around the block a few times – when you consider that he has directed some pretty explosive action flicks [he did Con Air, for example], so it’s a bit of a disappointment that he decided to film a remake of a Charles Bronson film – though not one of Bronson’s best.

Between the various riffs on father/son relationships and a homoerotic subtext that isn’t very sub, there are sequences of violence that underscore both in relatively imaginative ways. West chooses to turn his version of The Mechanic into a whirlwind of violence – as opposed to the moodier original that used violence to punctuate its building tension. One thing that remains to link both films is Bishop’s tastes – he lives in a beautiful house and enjoys classical music.

Technically, the film is beautiful to look at; it’s expertly designed and shot and the action sequences are both elaborately staged and mostly believable. Working with Foster, Statham shows, as he did in The Bank Job [and a few of his other films], that he has more range than he is generally given credit for. Foster is, in turns, delightful and appalling as Steve, the loose cannon.

There are moments when The Mechanic feels like it could turn into a piece of genre genius, but ultimately, it settles for less. Even so, it comes within a few moments of becoming something other than an amped-up action movie. The final scene is one too many, and completely offsets a potentially original finale for a whacked-out version of a happy ending. It’s still pretty dark, but in the context of what has gone before, it’s an all too Hollywood moment.