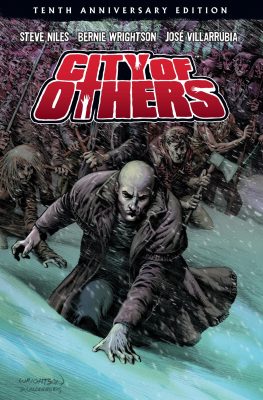 Dark Horse will honor horror comics legends Steve Niles and Berni Wrightson with a special, oversized edition of their classic limited series, City of Others – with colors by Jose Villarubia.

The story of Stosh Bludowski, a hitman who is forced to examine himself closely after two of his targets refuse to die.

City of Others will be in stores on June 5, 2019. Pre-orders are being taken now.

A Masterwork of Horror in a Deluxe Oversized Edition!

MILWAUKIE, Ore., (October 8, 2018)—Ten years ago, Steve Niles (creator and writer of 30 Days of Night) and Bernie Wrightson (co-creator and artist of Swamp Thing) joined forces to create a comics series like no other! Now, Dark Horse is celebrating the tenth anniversary of City of Others with a deluxe oversized hardcover edition colored by Jose Villarubia.

Stosh Bludowski, known simply as “Blud,” is a natural born killer with no human emotion other than rage. Blud spent years making a comfortable living as a contract killer until the day he runs across two targets who won’t die. As a grotesque mystery begins to unfold around him, the remorseless killer confronts a reality he could never imagine, and is invited to decide once and for all . . . is he human, or is he Other?

Collecting all four issues of the original comics series, City of Others: Tenth Anniversary Edition HC goes on sale June 5, 2019, and is available for pre-order at Amazon, Barnes & Noble, and your local comic shop.

Praise for City of Others:
“Wrightson and Niles have created a masterpiece in horror comics.” —Aaron Stueve, Broken Frontier

“Bernie is one of my greatest heroes and influences in art. When it comes to horror, few creators have contributed more to the comics medium than Bernie has.” —Alex Ross (Marvels)