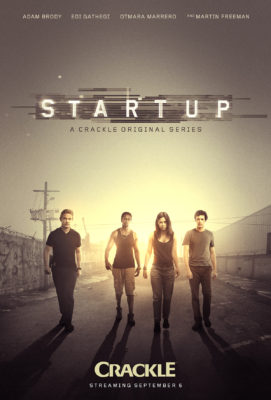 Crackle’s new drama series, StartUp, is not what you’re expecting. This is not a tale of guys gathered in a garage creating the next step in global communication.

Instead, it’s about Nick Talman (Adrian Brody), whose father is being sought by the FBI and whose ill-gotten gains he chooses to invest in a unique startup; Phil Rask (Martin Freeman), the FBI agent who’s got Talman’s father in his sights; Izzy Morales (Otmara Marrero), the tech whiz behind a new online currency, and Ronald Dacey (Edi Gathegi), the number two man in Miami’s preeminent Haitian gang.

StartUp will premiere on Crackle on Tuesday, September 6th. Follow the jump for further details.

“To live outside the law, you must be honest.” – Bob Dylan

Launching  Tuesday, September 6, 2016,  the 10-episode, one-hour series is set amongst the unconstrained, yet opportunist streets of Miami and weaves a complex and exciting narrative, focusing on the high-stakes struggle of what one will do to reach ultimate success. But this is not your average startup incubator story. “StartUp” is about the emergence of GenCoin, a brilliant, yet controversial tech idea centered around digital currency-an idea that gets incubated on the wrong side of the tracks by three strangers who don’t necessarily fit the mold of “tech entrepreneurs” and a crooked FBI agent who will go to any length necessary to take them down.

Martin Freeman (“Fargo,” “Sherlock”) plays FBI agent Phil Rask, specializing in financial crimes. Rask crosses paths with Nick Talman, played by Adam Brody (“CHiPS,” “The League”), a sharp and intelligent financier at a boutique firm in Miami, but it’s not Talman that Rask is after–it’s his father. Nick has a problematic relationship with his wealthy, irresponsible father, who disappears and forces Nick to stash his ill-gotten gain—instead of going to the FBI, he decides to hide the money by investing in a tech startup pitched by the unorthodox Izzy Morales, a tech whiz out to change the world, played by Otmara Marrero (“Graceland”). Edi Gathegi (“The Blacklist,” TWILIGHT) also stars in the series as Ronald Dacey – second-in-command of the local Haitian gang. When Ronald discovers that the money he left with Nick’s father has vanished, Ronald moves on to the next best thing—his son. An unexpected partnership forms between Ronald, Nick and Izzy which culminates in a dangerous alliance that make them a target for Rask (Freeman), who plans to take a journey to the very pit of darkness to take down the unsuspecting trio.