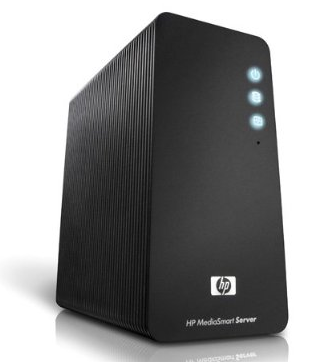 Anyone who knows me is aware how conflicted I am over the whole PC vs. Mac thing. Ok, I hate Apple and like Vista. I know it’s not cool or popular to say that, but Vista works fine for me.  I bought into the peer pressure and went ahead and purchased a Mac.  The problem with going back and forth between different computers is I always have to remember to move files from one computer to the next.  That’s where having a centralized home server would appeal to someone like me. I never tried setting one up in the past because I always thought it’d be too involved.  The folks at HP have simplified this process with their new line of “HP MediaSmart Servers.”  The model I tested was the LX195 and has 640 Gigs of room to play with. 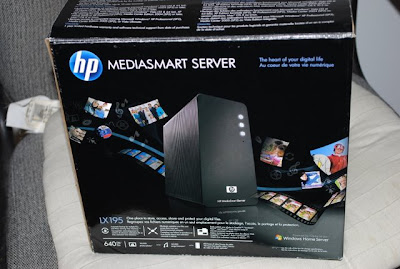 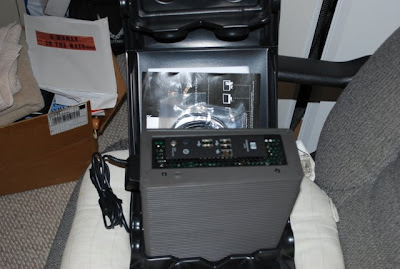 The Server itself carries a very small footprint it’s lightweight and blends in well with the rest of your computer/office setup.  The package comes with everything you need to get started including your software disk and all the necessary cables. It’s sad that I even have to mention cables, but an alarming trend in hardware electronics is companies are starting to leave out required cables. For instance when you purchase a Printer at the store they no longer include any connector cables – which is ridiculous – buy a $40 printer at Staples and they charge you $60 for a printer cable.  In the box you get the server, power cable, Ethernet cable, software and plenty of documentation on how to set everything up and manage it. 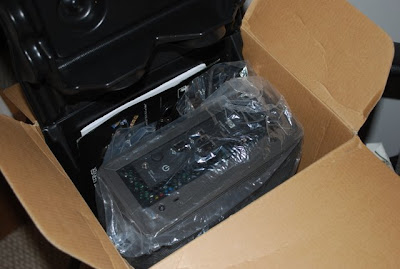 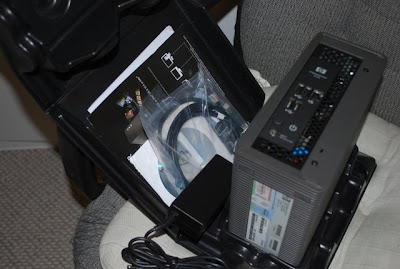 The set up itself was fairly painless. Once you take it out of the box all you need to do is plug it directly into the Ethernet port on your router.  After it’s plugged in you just install the software on a Windows PC. In one of the strange quarks it’s fully compatible with Macs, but you have to first set up the server on a Windows machine. I’m assuming most Mac users have a copy of Windows lying around somewhere, so this shouldn’t be that big of a hassle. Once your primary PC is set up and the software is installed on your MediaSmart server everything else is pretty straightforward.  Even with that I found the software to be a bit clunky.  Probably because I wasn’t paying too close attention I couldn’t initially figure out how to actually get content onto the server. Once I did it was a “oh wow, I’m pretty stupid,” moment. 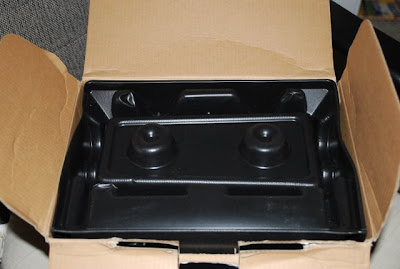 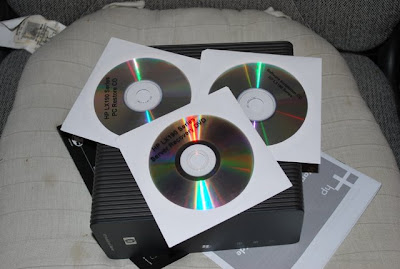 As I said, at first blush, I found the software to be really clunky.  It took me a few minutes to figure out how to actually transfer files to the server. At first it didn’t show up in my Computer Panel as an additional hard drive. In order to access it you have to use the included MediaSmart Control Center.  On a Mac it does appear as an additional drive in your Finder, when you open iTunes, iPhoto, etc. 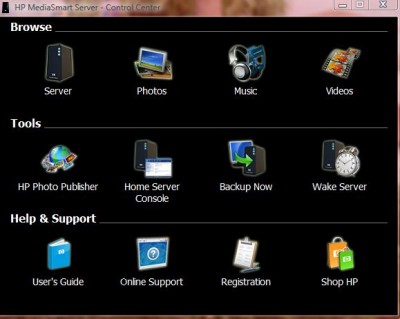 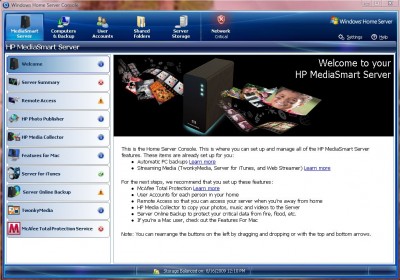 In the Control Center you can fully manage your server by setting up a pretty robust permissions system, set up your back-up routine – including configuring it to work with Mac’s Time Machine, manage all of your Media files, set up your remote access routines, and best of all it includes the ability to set up an iTunes Streaming Server.   For someone like me who switches computers and platforms every other week the main headache is dealing with maintaining iTunes.  Using the MediaSmart would make this process so much easier; it’s almost worth the price of admission alone.  The cool thing about the server is once it’s set up and properly configured all of my wireless devices easily found it. My PS3 (it works amazingly well with my PS3, didn’t even require authentication), Xbox 360, Mac, etc. all discovered it without much additional work.  I love the idea that I can put all my music, photos, digital comics, etc. in one place and not worry about constantly migrating between machines.

Wireless transfers are painfully slow.  I have 120 Gigs worth of digital comics that I wanted to put onto the server it took hours just to transfer 12 gb.  By comparison, I plugged in my portable hard drive and it took less than 2 hours to transfer the entire 120 gb folder.   I don’t know if the slow transfer is a hardware or network issue.  I do have a Verizon Fios fiber optic line in my house so I like to think I have a pretty snappy network. 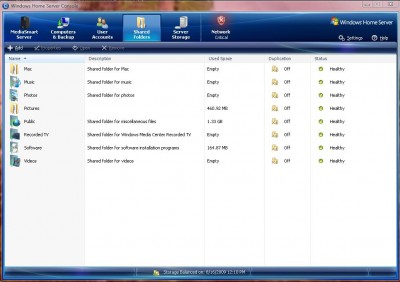 After a few days I pretty much gave up on the migration.  I would have stuck with it, if I didn’t have to send the device back, but it still would have tried my limited patience. Considering I have that 120 GB data and then another 100 gb in music and video it would probably take me several days to get everything over. But the nice thing is, once you go through that pain, theoretically, you shouldn’t have to go through it again and then you’ll be able to access anything, anywhere in your house.  HP has responded to my transfer issues, saying that I may have had a defective unit because everyone else is reporting transfer speeds equivalent to having a plugged in USB connection. I’ll do an review update if they send me another unit to do a quick test on.

The server has an Intel Atom Processor and 1GB of DDR2 Dram.  The Network support 10/100/1000 (Gigabit) Ethernet and wired and wireless PCs and Macs.  The only capacity limit is the 4 USB Ports so you could go to town and add 4 USB Hard Drives.  There’s a maximum of 10 User Accounts supported – which is a lot of users for a home environment.

Other than the painfully slow transfer I love the idea and concept of having a dedicated home server that can easily handle all my media files in one central location. Not only that 640 gigs to start at a $299 price is a lot of bang for your buck. Sure you can purchase 1 TB external HDs for half that amount but they wouldn’t be a “server” out of the box. You would have to do a lot of software and configuration on it to get it to work. This is one of those things I really didn’t get or understand the “potential” of until I played with it for a bit. Now I want one. I just wish it didn’t take so long to actually get all my data onto it.