I know you all expected at least one epic meltdown from me. But nope, this year, I had the magical pass that got me into every event without jumping through hoops. So I had a very easy time. One thing is clear: it seems the studios are more interested in unveiling trailers and news on their own terms than giving shows like CinemaCon the prominence it once held; very few exclusives were unveiled at the show.

Yes, all the studios were on hand to give us a song and dance, provide some lip service but this year there was a noticeable lack of pizazz to all the studio presentations – workmanlike is the best way to describe them. To make matters worse most of the trailers and footage were already previously released either weeks before or a few days prior. 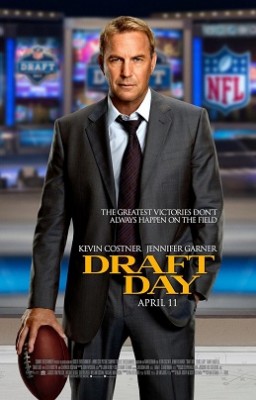 Due to the lack of real surprises at most of the studio presentations, the studios did make up for it a bit by giving CinemaCon goers three full-length screenings: Draft Day, Million Dollar Arm and Neighbors. I’m not allowed to review or discuss these films, but I will say it was kind of odd to program two sports-related films practically back to back. It would have been nice to get something like Spider-Man 2 or Captain America: The Winter Soldier.

Where the heck was Lionsgate? When last I checked, they have a pretty full slate of films coming up this summer and fall. They had banners and posters all over the place for things like Expendables 3, Step Up – All In, and more. Yet other than screening Kevin Costner’s Draft Day they were noticeably MIA. Maybe the execs were too busy opening Divergent? 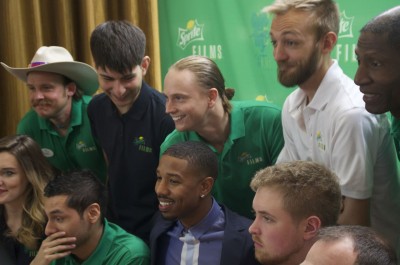 For the last several years, the folks at Sprite have done something really cool. They are giving aspiring college filmmakers an opportunity of a lifetime. This year’s crop of finalists had their films screened during a luncheon with Christopher Nolan, and they have a celebrity mentor in Michael B. Jordon. Beside all of that, Sprite really rolled out the red carpet for these future directors. It will be interesting to see where this crop of contestants ends up in the next few years. 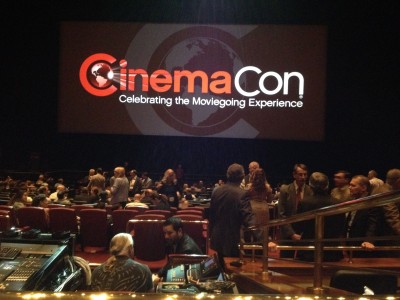 Considering CinemaCon is all about bringing together movie theater owners with content and technology providers, it shouldn’t be a surprise that Caesars Palace Coliseum Theater – the home built by Celine Dion, is one of the finest theaters in the Country – maybe the world. They use the best and latest tech including Christies Projectors, Harkness Screens, and Dolby Atmos sound system to bring CinemaCon audiences the best theater experience possible. Of course the reel broke during The Lone Ranger footage last year (maybe that was a sign), but 99.9% of the time – blissful perfection.

Every studio presentation included some variation of the line “This is an event movie that can ONLY be experienced in a theater.” Personally, I wanted to scream when I heard this; my local AMC and Regal theaters generally suck. So no, I’ll be watching a lot of these on my beautiful 60-inch home theater setup. Is there anyway I can get that outstanding Dolby Atmos set-up in my home – for under $500?  It was annoying that security was so rigid that I wasn’t able to take decent notes during the presentations. But I also appreciated people being forced to turn off their electronics.

If every theater was as flawless as this one, it’s impossible to argue that watching films on the big screen isn’t the best way to view them. It truly is an immersive experience when everything is firing on all cylinders. Returning to DC screenings after experiencing films the way they should be is always hard. 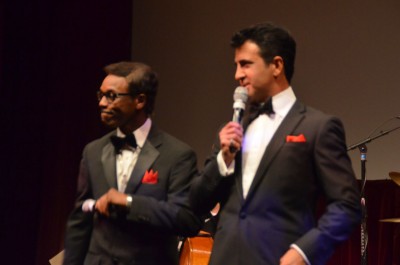 While it seemed like the studios phoned it in during their presentations, we have to give it up to them for the CinemaCon Parties. Paramount Pictures kicked the festivities off with a fun opening night event that featured Sammy, Dean, and Frank belting them out. The Rat Pack is one of the most popular shows on the strip, and one that I’ve been dying to see for years. So it was an awesome surprise to see them there.

Universal had a really fun Frat House-themed party for its upcoming film Neighbors. They went almost all in on the theme and had beer pong tables set up, Jello-Shots (mmmmmm…..), plenty of kegs, and more. Food included the Frat mainstay – pizza. Special entertainment was provided by the Hip Hop Mime Dance Team the “Jabbawockeez” and DJ crew “The Bangerz”. I didn’t get it, but OK. Only thing missing was Togas, where were the Togas!? It astounds me that these DJs are freaking mega millionaires. 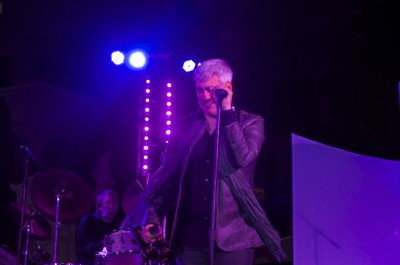 The folks at Coca-Cola threw a really nice closing night bash at Caeser’s Pool that featured American Idol winner Taylor Hicks. I don’t care what anyone says, he deserved to win that season. Soul Patrol for life! What’s the point of a pool party if you can’t, you know, swim? It was a gorgeous setup. 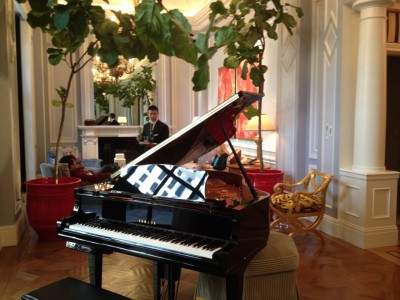 Further proof that the rich aren’t like normal folks can be found in the Titus Villa at Caesars Palace. Their PR Team invited a group of us press folks to come down and spend some quality time in their mega duper $25,000 a night Titus Villas.

This has to be the most amazing thing I’ve ever seen in my life. It’s not a suite and it’s not even a room. It is 11,000 square feet of pure, disgusting, opulence.  This slice of paradise included three ginormous bedrooms that all included big bathrooms and two-person jacuzzi’s, even the toilets were high end.  The Villa’s has it’s own private theater that has a 100 inch HDTV and two mega $5,000 massage chairs. The living room has an absolutely gorgeous, player grand piano, there’s even a private outdoor patio area with retractable roof that has a swimming pool, outdoor grill and 50-inch flat screen TV. 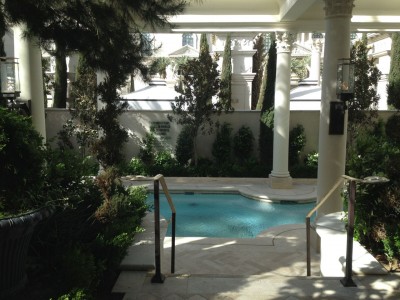 Several movies including The Hangover series were filmed at Caesar’s Palace, but they didn’t say if this specific villa was used as one of the locations. There are Mac mini-servers in the suite to power most entertainment needs, and further proof that the rich aren’t like us:  They can select their TV provider (Dish, DirecTV or Cable).  The Villa even comes with a butler and you can get a private chef to cook up your meals in the private kitchen. 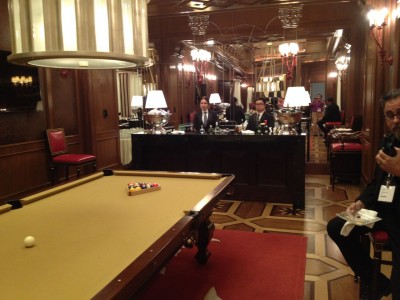 The Villas were made available for free to their high rollers for years and are now available for “normal” folks to rent. Really, though, if you can afford a $25,000/night hotel room, aren’t you by definition a high roller, and getting this room for free? So what is the point?