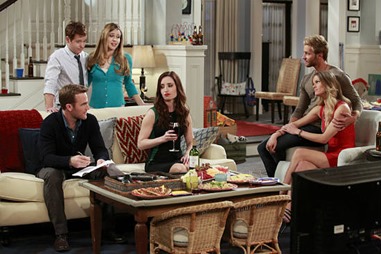 Friends With Benefits (Mondays, 9/8C) is CBS’ latest rude with-heart half-hour comedy. Here, we see members of a group of friends at differing points in their relationships – a couple who’ve just had their first child after seven years of marriage; a woman who has just become engaged to the man of her dreams; a guy whose marriage is newly over, and a woman whose superficiality prevents her from seeing a guy long enough to even form a relationship.

Bobby and Andi Lutz (Entourage’s Kevin Connolly and Roswell’s Majandra Delfino) have been married for seven years and have just had a baby; Will Stokes (James Van Der Beek) is separated and staying with the Lutzes; Jules Talley (Brooklyn Decker) is in a whirlwind relationship with Lowell Peddit (Rick Donald), an Australian vegan restaurant owner and the man of her dreams, and Kate McLean (Zoe Lister Jones) is a successful businesswoman whose pickiness and superficiality we become acquainted with in a montage during which she lists the reasons she totally failed to continue seeing a number of guys.

Written by Dana Klein Borkow and directed by James Burroughs, Friends With Better Lives is rude, crass and fairly funny. One of the earliest bits involves Will, Andi and Bobby watching TV while Andi wears a breast pump. Then there’s the abovementioned montage with, among other things, a particularly nasty Indiana Jones reference, and a forgotten anniversary – with its unexpected consequences.

Despite its crudity – or perhaps because Borkow knows just when to let up – FWBL is surprisingly funny. Connolly and Delfino have the kind of comfortable chemistry that allows us to believe they’ve really settled into their marriage – and it’s nice to see Delfino, who was so good on Roswell, back on TV. Van Der Beek continues to impress in comedic environs, here playing a guy who must have been both the class clown and star quarterback but is now having an emotional crisis he’s not really equipped to deal with.

Decker, who was the only funny thing in Just Go With It, seems perfect as the enthusiastic Jules and has great chemistry with Donald (who is terrific as the almost too handsome Lowell), and Jones kills as the smart, sarcastic and hot Kate.

One of the things that makes FWBL stand out a bit from the crowd is that none of its characters is anything approaching stupid. They may have their blind spots, but all six characters are intelligent and frequently witty. That’s enough to compensate for some, if not all, of the show’s crassness – along with the fact that it is frequently genuinely funny.

Just the fact that I, as a jaded critic, laughed out loud more than once during the pilot is enough for me to recommend the show. That doesn’t happen very often.