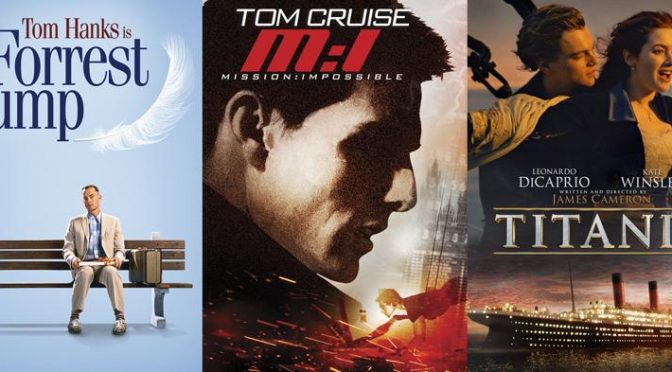 Sundays in May will be big movie nights at CBS.

Five Iconic, Acclaimed Films from the Paramount Pictures Library to Be Broadcast Every Sunday in May

Each week, CBS will give viewers the opportunity to revisit the following beloved films that remain a big part of the cultural zeitgeist: “Forrest Gump,” “Indiana Jones and the Raiders of the Lost Ark,” “Indiana Jones and the Last Crusade,” “Mission: Impossible” and “Titanic.” Each of these cinematic triumphs stands the test of time and is filled with epic adventure, romance, death-defying stunts and Academy Award®-winning performances.

ABOUT “INDIANA JONES AND THE RAIDERS OF THE LOST ARK”

Get ready for edge-of-your-seat thrills in “Indiana Jones and the Raiders of the Lost Ark,” winner of four Academy Awards®. Indy (Harrison Ford) and his feisty ex-flame Marion Ravenwood (Karen Allen) dodge booby-traps, fight Nazis and stare down snakes in their incredible worldwide quest for the mystical Ark of the Covenant. Experience one exciting cliffhanger after another when you discover adventure with the one and only Indiana Jones.

In the first installment of the popular franchise, Tom Cruise stars as Ethan Hunt, a secret agent framed for the deaths of his espionage team. Fleeing from government assassins, breaking into the CIA’s most impenetrable vault, clinging to the roof of a speeding bullet train, Hunt races like a burning fuse to stay one step ahead of his pursuers… and draw one step closer to discovering the shocking truth.

Acclaimed filmmaker James Cameron’s timeless and unforgettable tour de force won 11 Academy Awards® and triumphs as a true cinematic masterpiece. In the movie, Leonardo DiCaprio and Kate Winslet light up the screen as Jack and Rose, the young lovers who find one another on the maiden voyage of the “unsinkable” R.M.S. Titanic. But when the doomed luxury liner collides with an iceberg in the frigid North Atlantic, their passionate love affair becomes a thrilling race for survival.

ABOUT “INDIANA JONES AND THE LAST CRUSADE”

There’s nothing more exciting than trying to keep up with the Joneses in “Indiana Jones and the Last Crusade.” Indy’s (Harrison Ford) Nazi enemies are back and have kidnapped his father, Professor Henry Jones Sr. (Sean Connery), to get help in their search for the Holy Grail. Following a trail from America to Venice to the deserts of the Middle East, it’s up to Indy to save his father, save the Grail and save the day in this non-stop, action-packed adventure the whole family will treasure.