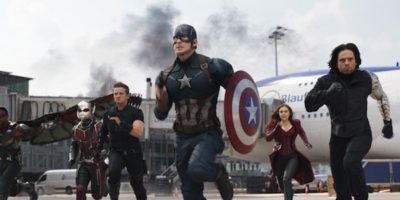 Captain America: civil War is set to be one of the highest grossing films of all time because a) it’s almost an Avengers film, b) it introduces Black Panther and Tom Holland’s perfect take on Spider-Man, and c) it’s just that good.

Seriously, if I’d seen Civil War before I saw Batman v Superman, even Wonder Woman wouldn’t have raised it above an F. Everything it did wrong, Civil War does right.

Now the world’s governments are ticked and want superheroes to sign a treaty (The Sokovia Accords after the country the Avengers saved from destruction in Avengers: Age of Ultron) putting them under the oversight of a panel of UN members.

Tony Stark (Robert Downey Jr.) is the man who gets to inform the others that this is the way it’s going be – and that it’s by far the best available option (the next best being retirement and the worst incarceration). This doesn’t go over well with Cap – always the staunch individual rights guy.

The team splits just before the Accords are to be signed and at the ceremony, the unthinkable happens – there’s a bomb and one of the victims is King T’Chaka of Wakanda. A fuzzy photo of Bucky Barnes, The Winter Soldier (Sebastian Stan) finds its way on air and before you know it, despite any hard evidence one way or another, he’s on the wrong end of a shoot-to-kill order.

Between the ethical/moral positions Tony and Cap take on the Accords, and the way Cap’s best friend from when they grew up together in Queens, the two find themselves, however reluctantly, on opposing sides.

Action and anguish ensue in the Marvel manner – moments of genuine darkness; moments of almost absurd whimsy, and plenty of action – all driven by the characters. Even the action is character-based.

For example, the Black Panther/King T’Challa (Chadwick Boseman) moves and fights like a cat; Natasha is practically a ninja with a sting; Cap is an old-fashioned slugger/grappler, and so forth.

Each character has a personal motivation for their actions – T’Challa by the desire for vengeance and not by the Accords (which keeps the film from being solely an us vs. them thing); Cap suspects his friend is being framed (but no one else even stops to consider that), and Spider-Man, well he’s just thrilled to be there. 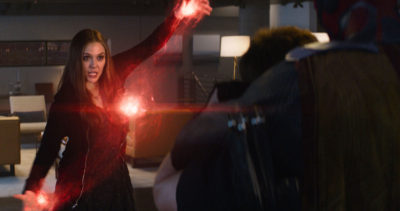 Of course, if Bucky’s been framed, someone must have planned it and must have some motivation for doing so. That someone is a Sokovian named Zemo (Daniel Brühl) but while his motivation might seem obvious, his plan is something else again.

In between all the action and debating, there are the kind of interesting character moments that differentiate Marvel movies from their Distinguished Competition: Cap learning that S.H.I.EL.D Agent Sharon Carter (Emily Van Camp) was Peggy Carter’s niece; a sequence in which there’s a kiss and two spectators respond like goofy high school kids; the hint at the beginnings of a relationship between Wanda and Vision (Paul Bettany); Spider-Man’s sheer joy and exuberance, and so on.

And of course, Spider-Man and Ant-Man (Paul Rudd) steal every scene they’re in. Like Spidey, Scott Lang is just thrilled to be there, and when he’s told the consequences of his helping Cap could be jail, he shrugs it off, ‘What else is new?’

Another strong point is that the story – which follows a very specific plotline – plays with standard superhero tropes so that the big, battle sequence between opposing Avengers is the film’s climax – it’s not facing off with and thumping the bad guy. That’s not even a big deal – even after Cap, Iron Man and Bucky track down Zemo.

Rather, the biggest deal is something we see, in part, much earlier in the movie – then see fully before another, final, key fight sequence. 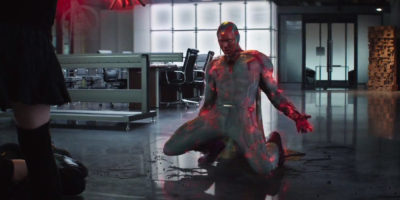 Like winter soldier, Civil War is a unique entry in the growing Marvel Cinematic Universe. Like Guardians of the Galaxy and Ant-Man, it has fun with comic book and comic book movie conventions. Writers Christopher Markus and Stephen McFeely and directors Anthony Russo and Joe Russo aren’t satisfied to just churn out another superhero slugfest.

Captain America: Civil War is the best Marvel movie to date precisely because it doesn’t quite conform to a specific formula. By going its own way, it helps set up a superhero universe that is quite as predictable as it might have been.

As a longtime comics fan, I love that. Captain America: Civil War sets a high bar for superhero movies to come.