Entertainment News for The Rest of Us
Michelle Alexandria
Blu-Ray, High Definition 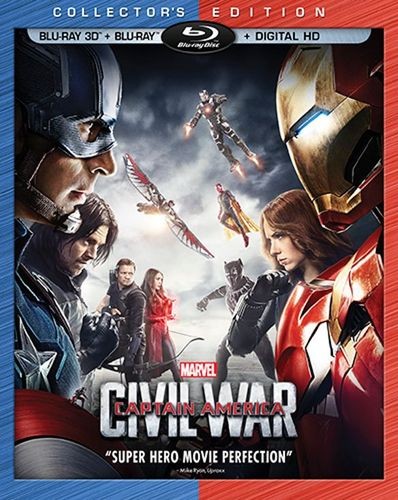 I won’t go as far as to say Captain America: Civil War sets a new bar in Superhero films, but it’s pretty darn good. When I first walked out of the screening a few weeks ago, I was on a giddy high, thinking it was probably one of the best films of the year, but now that I’ve had a few weeks away from it, the hyperbole is a bit toned down. Of course I have a tendency to forgive a film’s obvious flaws the first few hours after an initial viewing.

First thing you need to know is, this isn’t a real Captain America film. It’s a straight up Avengers movie. Which is great because last year’s Avengers film was a mess. This movie is just as much about the characters as it is about the action sequences. It can almost be used as a study on how to properly make big tent pole action films. All the action in it, there’s a LOT, is done in service of the story. While the first half of the film feels incredibly jumpy as it moves at a breakneck pace from one location to another it all comes together nicely in the 3rd act.

One big gripe is the growing, tired idea of the bad guys always having video cameras in places they shouldn’t. It’s become the modern day Deus Ex Machina. They did it in Batman Vs. Superman so much that it got irritating. Here the plot device is used once in the 3rd act and you can’t help but shake your head at the plot twist. Somehow there was a camera out in the middle of nowhere that no one noticed. I guess we’re to assume they used drones to ensure monitor Bucky.

As someone who read the original Civil War event, it was a little hard watching this big screen adaptation. There are some small nods to the source material but not much. The movie stands on its own. What makes this movie work so well is that both sides aren’t inherently wrong and I love that the events of all the previous Avengers and Captain America films have real world impact.

You can sympathize with the regular people on the ground who are directly impacted by the city wide destruction and collateral damage that is caused when Super Heroes do battle. It’s one of the aspects of Batman vs. Superman that I loved and love it here as well. I did think the idea of having Alfre Woodard play a grieving mother who blames Tony Stark (Robert Downey Jr.) and the Avengers for the death of her son, both affecting and hokey at the same time. She is the catalyst for Stark to realize that heroes do need policing.

Steve Rogers/Captain America (Chris Evans) of course disagrees, saying the last thing heroes need to be is an armed force for the Government. The two find themselves at odds on this issue. At the same time Rogers is on a personal mission to try and save his long time friend Bucky ( Sebastian Stan ) who gets blamed for blowing up a Nato conference and killing Black Panther’s (Chadwick Boseman) father.

I’m not going to waste your time with a laundry list of all the characters in this film except to talk about the two newest additions Spider-Man and Black Panther. As someone who read the book, I sort of gave up on the hope that Spider-Man would even be part of this, so the fact that we got him here was one of the films true wow moments.

Unfortunately, I think the trailers ruined the surprise. He’s not a player here and his appearance amounts to Fan service than anything that has to do with the plot. I also thought they made him way too powerful in his brief appearance. He was taking people out left and right. Which, as an old school Spider-Man fan I know he’s fully capable of.

The main take away is, in Tom Holland‘s hands there’s no reason why the next installment of Spider-Man shouldn’t blow people’s minds. I think that was the point of including him in this. To let fans know that yep, Spider-man is going to be awesome when his own film comes out.

What I said about Spider-Man applies to Black Panther as well but he has more scenes in the film. While he’s on Stark’s side, I don’t remember him having a discussion about why – other than he wants Bucky dead for killing his father. Boseman brings a quiet dignity and class, benefiting of a King to the character. He is the perfect embodiment of the character from the pages and everything fans could hope for.

Usually I roll my eyes at Superhero conflicts because most of them are caused by simple misunderstandings that would never happen if they just spent 2 minutes talking before throwing punches. Not to mention you know after five minutes they will hug it all out and go after the real villain. See Batman v. Superman for an example of this. Civil War works precisely because they had a debate and there’s no bridging the divide that forms.

This movie doesn’t have a traditional “villain” and there’s no simple “let’s work together bro” moment in the movie. There is someone who, it turns out, is manipulating events behind the scenes, but the big reveal felt anti-climatic and dumb. I’m not going to go on my soap box about the Marvel verse butchering yet another major villain, but come on. His appearance and reasoning at the end felt like a forced way to call a momentary truce. Ultimately once the genie is out of the bottle, there’s no easy way to put it back in.

This Civil War is going to be around for awhile now, the split feels real and that should lead to some interesting consequences in future installments of the Marvel U.

There’s not much to say here, the image quality is flawless, especially on my upscaling 4K television. I didn’t get a chance to watch the 3D version because my beautiful new $4,000 OLED TV doesn’t have 3D – which is a load of crap and probably the subject for an upcoming rant on the death of 3D. I like that Disney hasn’t fully abandoned the format. The audio sounded crisp and clean through my Sony 2.1 Soundbase – I know, one day I’ll get an 8.1 setup. As much as I like the convenience of digital, a uncompressed Blu-ray will always look better. this is reference quality work – if people still care about such things as uncompressed Picture and Audio.

This set includes a several nice extras including United We Stand/Divided We Fall a 40 minute documentary on the making of the movie, a commentary track, deleted scenes and Disney’s Movie Anywhere digital copy which includes all the extras from the Blu-ray (accept commentary tracks). The iTunes digital version includes a pretty cool extra that let’s you choose whether you are team Cap or Iron-Man. You’ll get to see some extras exclusive to each character including clips and images from their various films. The iTunes digital copy also includes an exclusive gag with Thor explaining what he was doing during Civil War.

Run out and get this movie, it’s one of the 10 best of 2016 and this is a well rounded set that should make any collector happy.  The Blu-ray set is the way to go because of Disney’s Movies Anywhere digital copy you get the film on just about every digital service in existence in addition to the Blu-ray.