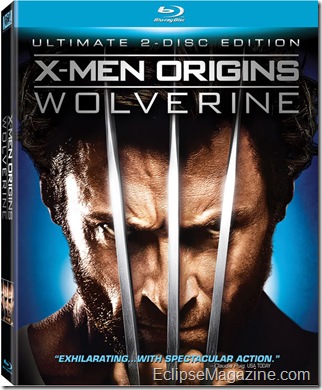 Ok, I’m getting a little annoyed with Fox. For some reason they have stopped sending out Blu-rays for review. It’s an alarming, but not surprising trend that studios are cutting critics out; I think this summer is the summer where there have been more Cold Openings than any in recent memory – especially for most of the garbage released in August. I can certainly understand their reasoning. Why should they screen their crappy films for critics when they know most likely we won’t like it and it still goes on to make hundreds of millions before the word gets out how horrible it is. Terminator, G.I. Joe, Transformers, and X-Men Origins: Wolverine all prove that with enough marketing studios can shovel junk and the masses will lap up. Now they are doing the same thing with providing DVD/Blu-ray screeners and I guarantee you the Blu-ray will probably do gangbuster business. So I actually went out and paid my own money to get X-Men Origins: Wolverine, ok, I Netflixed it.

Here’s the thing, I kind of liked Wolverine in the theaters, I forgave a lot of the more idiotic moments in the movie because I thought the strength of the first two acts outweighed the horrible 3rd act. Sitting through this movie a third time (I watched it on a international flight a few weeks ago) in the comfort of my own home was a real struggle because I knew what’s coming and it’s like this dark cloud that prevents me from enjoying the first 2 acts a third time around. There’s just too much in the movie that makes no sense, it’s frustrating to watch. Like Gambit’s fight with Logan, there’s absolutely no reason for this fight to happen other than the director thought it was cool.

In the Director’s Commentary Gavin Hood explains that he had no idea who the character was and that after reading the comics he really didn’t care about the character or plots, just the theme. That his origin has been done so many times that he could just make up his own because anything else stated previously simply didn’t matter. How can you get the "theme," without caring about the plot or character?! I stopped listening to his commentary after this statement (which is one of the first things he says). This in a nutshell explains why he screwed the movie up. In an alternate version of Wolverine’s memory lost scene (which is on the Disk), he VOLUNTEERS to get his memory wiped. HE F’ING VOLUNTEERS! The fact that Hood even bothered to shoot this scene is a testament to this man’s incompetence. I’m so tired of Hollywood hiring people who have no affinity for the stuff they are directing. The only problem is you’ll get someone like Zack Snyder who has too much affinity for the material (i.e. Watchmen).

This 1080p Transfer looks a bit fuzzy and not as sharp and clear like a Blu-ray transfer should be. It looks like a regular DVD that has been upscaled. The aspect ratio is standard letterboxed 1.85:1. The HD Audio sounds really good and clean. Subtitle tracks are available in French, Spanish and Portuguese. I really love the menu navigation, it’s clean, fast and makes sense.

Fox does do some interesting and cool things with the Features, I’m a big fan of the Ultimate X-Mode and love the slick IMDB integration. X-Men Origins: Blu-ray is worth a rental, but it’s not the showcase Blu-ray that it should have been primarily because the HD Transfer is lacking something and at the end of the day it’s just not a good movie.