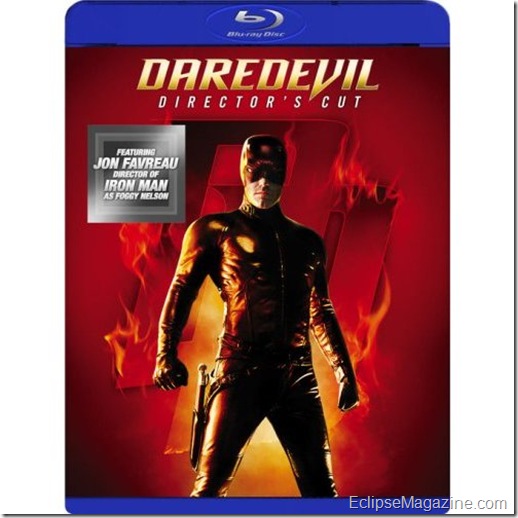 I never understood the vitriolic hatred fanboys had for the Daredevil movie and the irrational loathing of Ben "Mumbles" Affleck. Yes, they took a lot of liberties with the material. Colin Farrell and Jennifer Gardner were terrible. But then I never liked Colin or Jennifer. But I thought the film maintained the basic tone of the books, Ben was almost perfect casting for DD, he fit the part and the story was a good one. Again, except for the whole blind man fighting a female Ninja in broad daylight in a Playground, no less.  The funny thing about the Disc cover is they are hyping Iron Man director Jon Favreau.  This release is feature packed, but I’m really starting to get annoyed that these companies are still ignoring the Picture in Picture spec and the BD Live stuff. It’s one of the reasons I liked the HD-DVD format that was a uniformity of features. And a release like this should have some cool BD-Live and PnP. Check out the full press release below.

The DAREDEVIL DIRECTOR’S CUT Blu-Ray Disc transforms the theatrical experience, including an extra 30 minutes of footage, director commentaries, theatrical trailers, a making-of, music videos, still galleries and much more.  The DAREDEVIL DIRECTOR’S CUT Blu-ray Disc will be available for the suggested retail price of $39.98 U.S. / $49.98 Canada.  Prebook is September 3, 2008.

· Fuel: “Won’t Back Down” Music Video

· The Calling: “For You” Music Video

For Daredevil, justice is blind, and for the guilty, there’s hell to pay! Ben Affleck and Jennifer Garner ignite dangerous sparks and nonstop thrills in this “dazzling action-adventure” (The Film Journal) about the newest breed of superhero. By day, blind attorney Matt Murdock (Affleck) toils for justice in Hell’s Kitchen. By night, he’s Daredevil, The Man Without Fear – a powerful, masked vigilante stalking the dark streets with an uncanny “radar sense” that allows him to “see” with superhuman capabilities. But when the love of his life, fiery Elektra Natchios (Garner), is targeted by New York City’s ruthless Kingpin of crime (Michael Clarke Duncan) and his deadly assassin Bullseye (Colin Farrell), Daredevil may be about to meet his match.