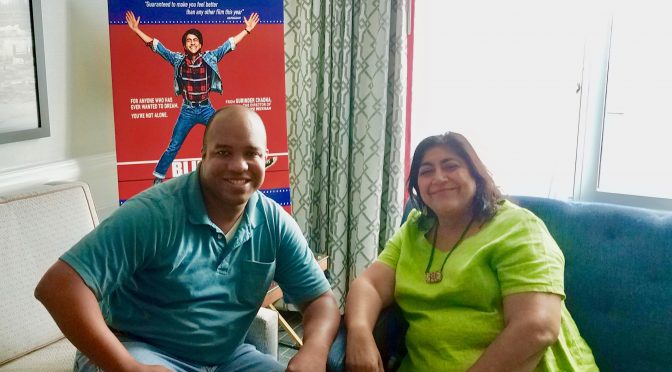 So, how did you come about finding the story and putting it into a great film?

And I have been since I was at school.

And then, I came across this article in an English newspaper by another Bruce Springsteen fan who happened to be a Pakistani journalist named Sarfraz Manzoor.

And I looked him up and we both became friends because we thought we were the only Asians in Britain who were Bruce Springsteen fans. And then a few years into our friendship, he said “I’m going to write a memoir.” And I had a big hit with Bend it Like Beckham at that point, and he was secretly hoping I might find something in his memoir. And when I read it, I said “this is terrific! I love it!” But—and I know how to tell it’s a good movie—but, there’s no movie without Bruce Springsteen’s blessing, because we need all his songs and his music. So we were like, “ok, how are we going to do that?”

Well, I think it was a miracle that happened. In 2010, Bruce came to London for the premiere of The Promise. I was invited, and that was his movie, Darkness on the Edge of Town.

I took Sarfraz with me. We stood on the copy, and Sarfraz had a copy of his book to give to Bruce.

But as Bruce Springsteen approached, he recognized Sarfraz from being in the front row of all his concerts.

And he came over and he said, “Hey man, I read your book. It’s really beautiful.” So, Sarfraz is going to meltdown.

And I was like, “oh my God, this is a sign. I’ve got five seconds to a movie deal right now with Bruce Springsteen.” So, I tried to be very professional.

Unfortunately, I wasn’t very professional. I just blurted it out. I said, “Bruce, I’m Gurinder Chadha! I really want to make a film about this. You’ve got to help us. You’ve got to support us. Please, please support us!” And he kind of looked at me and he looked at Sarfraz and went, “sounds good. Talk to Jon.”

And Jon Landau was behind him and his other managers, Tracy Nurse, Barbara Carr. And we exchanged contact and that’s how it all happened.

That is amazing, especially there this one clip that we always have to watch, and it was one of my favorites is…you have to understand Bruce’s music. And we had it through Thunder Road, we had it in the amazing Born to Run. So I wanted to know, what was the process of filming those two sequences when we had the words on the screen, and we had the kids in Born to Run dancing through the school, music blaring, going to Luton and having a ball, having a blast?

Well, once he’d given us the blessings and I could use any of his songs in his whole library up to ’87, the daunting task was that me, as the director saying, “ok, how am I going to do this in a way that lives up to Bruce and his legacy?” Because taking Born to Run and turning it into pictures in a small town like Luton, which has been voted the worst place to live in Britain.

By people who live in Luton.

It’s a tough one. But I also knew people who watch the movie wouldn’t necessarily be Bruce fans like that, so I didn’t want to alienate them. So in the end, I just had to work on what I thought worked for me, and I had to pretend that Bruce Springsteen didn’t exist as this rock god and that he was just an ordinary singer-songwriter who had written a bunch of songs for me and my film. So, I treated as him as songs he had written for me specifically and that’s how I then started working with songs that I felt relevance to my script and relevant to the story that I was telling, an relevant to Sarfraz’s life as well, you know? And that’s how it works. And then it counts, man, as a director, you imagine things; you visualize things. And so, I just visualized the first time he would hear Springsteen and that was Dancing in the Dark.

And then what really seals the deal for him is Promised Land, when he’s on a very depressed, lonely, dark night. He hears these two songs and they really speak to him. And then Born to Run was like a very joyful, sort of rebellious exuberance where someone has been putting Bruce Springsteen down in the movie.

And he just says, “forget it. I’m going to take over.” And he makes the whole listen to Springsteen.

Especially when he wanted to introduce Tiffany songs, and Debbie Gibson was in.  Springsteen, I’ll remember that.

Yeah, you see Springsteen is the DJ in the local college. He says, “Springsteen? That’s what your dad listens to.”

“Students today want things they can relate to, like Cutting Crew.”

(laughs) That’s great. So, let’s talk about the cast. I’m about to talk to Aaron and Viveik in the next few minutes. What was the audition process like to cast those two roles, especially Viveik, who I understand this is his very first feature film?

Yes. Well, I was looking initially for Javed. I had to look for the lead. And there was this small group of actors who fit the bill who could play sixteen to eighteen, Asian, in Britain. But it was a small and talented group, and both Aaron and Viveik were both very, very good. Great, actually. And I did a conventional audition, and then I pulled my speaker out, put it on the table and played Born to Run and—you’ll have to talk to them about what happened.

Oh, I definitely will now!

And make you see his way. And that’s why I then cast him as Roops. He’s very persuasive, very charismatic. And Viveik was very inward-looking and so hence, I made the choice of casting him as Javed and Aaron as Roops.

And now you’ve got him in Beecham House, your next project.

Yes, coming out on PBS soon. And yes, we had such a good time. I said, “come and do this other thing in India.” So, we both went off to do Beecham House right after the movie, and it was a sumptuous six-part TV series which will be out on PBS soon.

Awesome. Well, Gurinda, thank you very much for making a wonderful film.

Thank you so much.

And continue to run. That’s all I’m going to say.

Stay tuned for my second part of the movie interviews with actors Viveik Kalra and Aaron Phagura & author Sarfraz Manzoor. Blinded by the Light – In theatres THIS FRIDAY!