Officer K – a blade runner working out of LAPD – finishes an assignment and sets off a chain reaction that could be world altering.

Noticing a flower (which should never have existed outdoors) near a dead tree, he has drone scan the site. It finds a box buried almost thirty feet down.

When he returns to the precinct, we learn something unexpected about K – and shortly thereafter, we learn that his discovery at Morton’s farm could trigger a war.

The mystery box, it turns out, isn’t the only mystery here. Events transpire to create doubts and speculation in K’s mind.

At the same time, he’s being urged by his boss, Lt. Joshi (Robin Wright), to retire another, significant replicant. 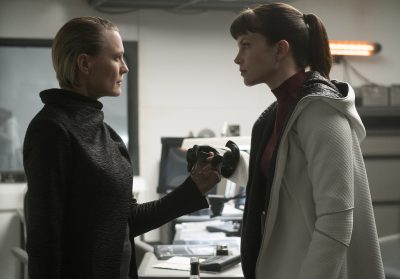 In his search for himself, he encounters several different people – the tech mogul Niander Wallace (Jared Leto), a tech genius who took over the bankrupt Tyrell corporation and used Tyrell’s replicant technology as a base to create a replicant that would obey a human and not try to harm one even at the cost of its own life; and Luv (Sylvia Hoeks), Wallace’s right-hand person/replicant and occasional hitperson (Hoeks holds the screen every time she appears); Dr. Ana Stelline (Carla Juri), a specialist who builds memory implants for replicants; and, eventually, Rick Deckard (Harrison Ford).

The script, by Hampton Fancher (Blade Runner) and Michael Green (Logan), is as deliberate and elegantly dark as its predecessor – with characters who could be slotted into a Philip Marlowe or Sam Spade film. Even K’s unusual girlfriend, Joi (Ana de Armas) is a 21st century take on the lead female in a pulp novel.

There are, of course, references that provide unexpected delights – K’s visit to Gaff (Edward James Olmos) in a seniors’ home yields an origami sheep; there’s a reflection of a Han Solo line, and a few other moments that pay homage to Blade Runner and Star Wars while adding glimpses into characters. 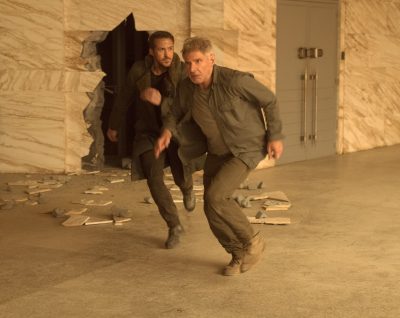 Blade Runner 2049 is not the action flick that the TV spots make it out to be – it’s considerably more thoughtful and provocative than that (though the violence and action, when they come) can be very powerful.