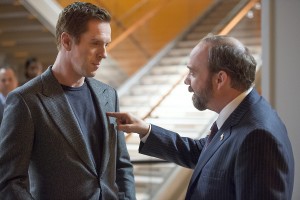 Damien Lewis stars as Bobby ‘Axe’ Axelrod, a man with eff-you money in Showtime’s new series, Billions. He’s also the one link to three different companies that seem to be causing ‘trading irregularities’ – and about to face the wrath of U.S. Attorney, Chuck Rhoades, played by Paul Giamatti.

The series revolves around the two men as it blends the worlds of ultra-wealth, influence and corruption. Check out the intense trailer (NSFW for language) after the jump.