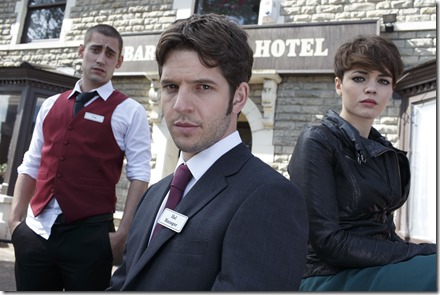 The final season of the original Being Human (BBC America, Saturdays, 10/9C) kicks off tonight with none of the original cast left after ghostly Annie saved the world and passed on in the season four finale. Her replacement as ghost roommate to Hal and Tom is Alex – Hal’s unfortunate would-be human girlfriend from the last three eps of season four – but though none of the original three remain, Being Human UK continues to display the wit, horror, comedy and drama that made it a fan favorite from the beginning. Plus, it has a cheekiness to it that the North American version has yet to find (maybe it’s a British thing…).

Trinity, the season five premiere, opens in 1816, with Hal (Damien Moloney) and werewolf leader Lady Catherine (Victoria Cross) in a delicate situation – she’s snuck into his chamber and attempted to kill him. After a brief skirmish – during which Hal suggests he knew she’d be coming – the two settle into an uneasy truce. Throughout the ep, we come back to them as Hal tries to convince her that the werewolf/vampire war is being manipulated by an outside force.

From there, we find newly dead Alex (Kate Bracken) not adjusting at all well to being a ghost – at least emotionally. She’s got a handle on the manipulation of physical objects down cold, so she’s definitely made some progress in that regard – and Tom (Michael Socha) has Hal tied to a chair to keep him from succumbing to bloodlust. What seems to sober Hal up is the mess the house is in – he pleads to be let free so he can clean up.

From there, we meet the unfortunate Ian Cramm (Colin Hoult), whom his boss refers to as Crumb, at work. He’s kind of like The Office’s David Brent – only without any authority. The poor sod is doomed to an equally unfortunate encounter with the recently freed Hal that doesn’t go well for him.

Meanwhile Hal and Tom have lost their jobs at the café because of shifts missed rehabbing Hal – which leads to their applying at the Barry Grand Hotel – which they are informed by vampire government employee Mr. Rook (Steven Robertson), has been the site of far too many suicides. 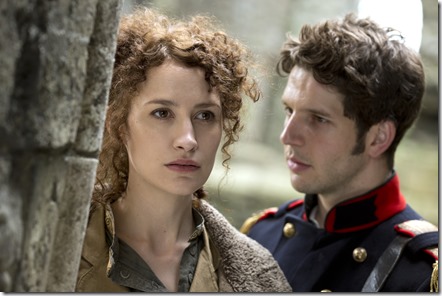 Series creator Toby Whitehouse takes each of these seemingly disparate threads and weaves them together in a manner that melds the mundane, macabre and cheeky in a manner that cannot be precisely described in any other way than unique.

An exchange between Hal and Crumb highlights what I mean:

‘I don’t believe in the devil.’

Trinity makes little obvious use of visual or makeup effects – there are less than a handful of physical, vampiric gags – and only one genuinely big nasty CG effect (hint: it’s in the 1816 arc). We never actually see a werewolf. Mostly, the mood is built through clever use of the camera, editing and music.

It’s good to see that the chemistry between series leads Bracken, Moloney and Socha remains strong – and that Bracken’s Alex is an even stronger character as a ghost. Her straightforward anger and aggressive refusal to be ‘the girl’ gives a pointed contrast to the long suffering Hal and the soulful Tom.

It’s not often that a show retains a high level of quality after so many cast changes, but Being Human UK is one of the exceptions. The season premiere manages to be as fresh and lively as it was in season one. The loss of Annie and the big Old Ones arc has, oddly enough, allowed for a potentially even bigger struggle in the show’s final go around. And not to belabor the point, the aura of cheekiness that’s exhibited throughout makes Trinity a horrific delight from start to finish – and it continues throughout the episodes made available for review (as witness, check out the use of a very familiar spaghetti western theme in next week’s episode, Sticks and Ropes).