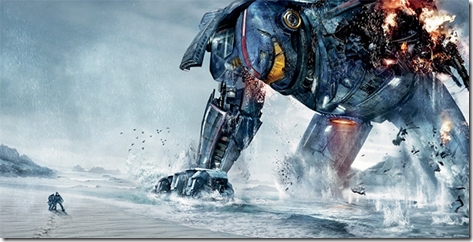 As a longtime fan of Kaiju movies and Mecha manga and anime, I was tickled when news came that Guillermo Del Toro was making a movie that combined the two. The first trailer looked big but didn’t really explore the characters; the second trailer and subsequent TV spots gave just enough that I set aside my doubts. After all, if there’s a filmmaker who gets more pure joy from making movies than Del Toro, I’m sure I don’t know who that would be.

Pacific Rim opens with a brief history of how the world first encounters an alien lifeform when a giant monster rises up from the ocean floor and kills tens of thousands on a rampage before it is finally defeated – and how more kaiju (Japanese for ‘giant beast’) followed. Stubborn humanity built giant mechas, called Jaegers (German for ‘hunters’) to fight them on their own terms and seemed to be winning – until the American mecha, Gipsy Danger was destroyed taking down a bigger, meaner kaiju than anyone had seen before.

Jaegers required two pilots, working in perfect sync through a procedure that enabled them to link minds – the big mechas were simply too large for a single pilot to control with suffering complete mental collapse. When Gipsy Danger was beaten, the kaiju had ripped one of the pilots, Yancy Beckett (Diego Klattenhoff, Homeland) from the control pod – leaving Yancy’s younger brother, Raleigh (Charlie Hunnam, Sons of Anarchy) to finish the battle and get the damaged mecha to land. 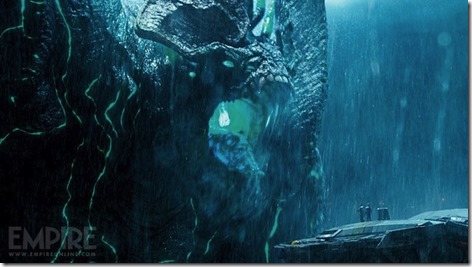 The U.N. closes down the Jaeger program in favor of building a gigantic wall along the coasts of the Pacific Rim, but when a new kaiju rips through the wall at Sydney, Australia, the Aussie mecha, Striker Eureka – piloted by father and son duo Herc and Chuck Hansen (Max Martini and Robert Kazinsky, respectively) – appears and takes it down. The Jaeger Project has not closed down – it’s been kept alive on a wing and a prayer by Stacker Pentecost (Idris Elba).

Pentecost has the last five Jaegers at a base that was supposed to be a storehouse and nothing more, but with two brilliant if eccentric scientists – the intuitive Dr. Norton Geizler (Charlie Day (It’s Always Sunny in Philadelphia) and the number cruncher Dr. Hermann Gottlieb (Burn Gorman) – and the current international crews of the Jaegers, he has a plan to take the fight to the kaiju.

To that end, he was tracked down Beckett, who has been nomadically working the wall construction, and persuades him to return to the fight – which does not sit well with Chuck Hansen (who is rightly described at one point as an egocentric jerk with daddy issues). Beckett will co-pilot the rebuilt Gipsy Danger – with Mako Mori (Rinko Kikuchi), despite Pentecost’s initial opposition.

Although there are mechas from China (Crimson Typhoon – piloted by triplets), Russia (Cherno Alpha) and Japan (Coyote Tango), it comes down to the Aussie and the Yank Jaegers in the end (though, to be fair, Gipsy Danger is piloted by and American and a Japanese). 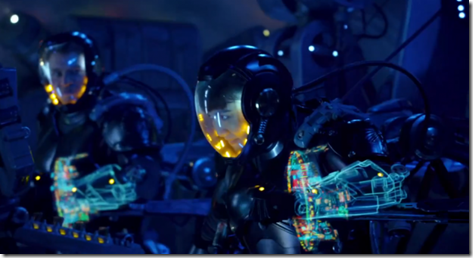 One of the reasons Pacific Rim works so well is because the writing allows important bits of characterization to be revealed under different circumstances. Another is the detail – the city and base sets are not CG, they’re real sets that took up every set at Toronto Pinewood (the largest studio in North America). The Jaegers may be CG, but the control pods are completely real. The detail on the kaiju is such that we see their blue blood begin to flow; we see the layers of their scales. The same is true of the mechas – they may be rebuilt but they’ve been used hard and it shows.

The cinematography is equally well done – when the camera is on the water, it bobs as it would if it was actually on a boat; water splashes on the lens. There are even moments when the shot slips, however briefly, from the fights – as if the cameraman slipped, or his balance was affected. It’s never enough to make us queasy, or cause us to lose continuity; it’s just enough to add a layer of reality to what is by definition a surreal situation.

As Pacific Rim reaches its final act, revelations come hard and fast – in regard to a sleazy dealer in kaiju parts (Ron Perlman) and our two bickering scientists, but especially in regard to Pentecost.

Elba – whose motivational speech about cancelling the apocalypse reminds of Winston Churchill – is not the only standout here. Hunnam, Kikuchi, Martini and Kazinsky are all super, and Day and Gorham steal every scene they’re in separately or together.

Del Toro co-wrote the script with Travis Beachum from Beachum’s original story and you can see influences coming from movies like Godzilla and Gamera; anime/manga like Neon Genesis Evangelion and TV shows like Ultraman. Some of the kaiju silhouettes will remind of other great movie monsters (Kong, the aforementioned Godzilla) without actually looking that much like them – which is kind of a metaphor for the actual movie: it reminds of us of its influences while just looking like itself.

In the end, what matters is that we can have as much fun watching Pacific Rim as Guillermo Del Toro had making it. That’s huge.