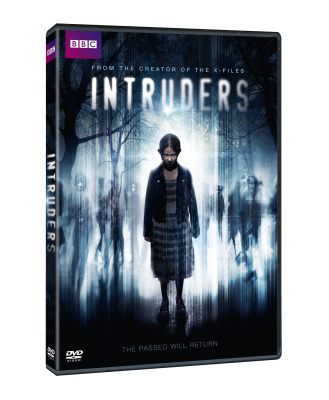 “ ‘Don’t Let Them In’ reads the show’s tagline, but we’re happy to have this show intrude upon our Saturday nights…” – Entertainment Weekly

New York – October 15, 2014 – BBC Home Entertainment will release the eight-part suspense series Intruders on Blu-ray and DVD on December 23, 2014. From writer and executive producer Glen Morgan (The X-Files), Intruders is a chilling tale that spins a fascinating and complex web of drama in the moody Pacific Northwest. John Simm (Doctor Who, Life on Mars) and Academy Award®-winner Mira Sorvino (Mighty Aphrodite, Norma Jean & Marilyn) star in this paranormal thriller about a secret society devoted to chasing immortality by seeking refuge in the bodies of the living. The Hollywood Reporter called the series “…spooky and riveting, a paranormal thriller as addictive as anything on television.”  The Blu-ray and DVD includes “Inside the Intruders” a special behind-the-scenes look at the series featuring interviews with John Simm, Mira Sorvino, Glen Morgan and more.

As strange, apparently unrelated events start happening, multiple story-lines – a missing wife, an assassin covering his crimes, a child on the run – begin to intertwine to reveal a conspiracy that will forever change our understanding of human nature. The series, based on British novelist Michael Marshall Smith’s ‘The Intruders,’ gave BBC AMERICA its biggest ever Supernatural Saturday series premiere when it debuted on August 23, 2014.

Jack Whelan (Simm), a former LAPD cop with a troubled and violent history, finds the quiet idyllic life he has created with his wife, Amy (Sorvino), shattered when she vanishes. Jack is drawn deeper into the mystery when his high school friend, Gary Fischer (Tory Kittles, True Detective), shows up on his doorstep asking for help with a murder case. Initially dismissive of Gary’s claims, the more Jack investigates the more complex and surreal his discoveries become. What Jack uncovers leads him down the dark path of his own past and closer to the terrifying revelations about a secret society known as Qui Reverti.

In order to conceal the truth, an assassin named Richard Shepherd (James Frain, Tron: Legacy, True Blood) is embarking on a series of lethal executions and is in pursuit of a seemingly innocent nine-year-old girl, Madison (Millie Brown, Once Upon a Time in Wonderland) – a run away with a score to settle who could be the end of them all.

With Gary’s help, Jack is determined to find and save the wife he loves, at any cost…

Under the direction of Eduardo Sanchez (The Blair Witch Project, Exists) and Daniel Stamm (13 Sins, The Last Exorcism), the creative team includes acclaimed production designer Mark Freeborn (Breaking Bad), and the series has music by Bear McCreary (The Walking Dead). The series is executive produced by Jane Tranter (Criminal Justice, Getting On, Da Vinci’s Demons) and Julie Gardner (Getting On, Doctor Who, Torchwood) for BBC Worldwide Productions, Glen Morgan and Rose Lam (The L Word).