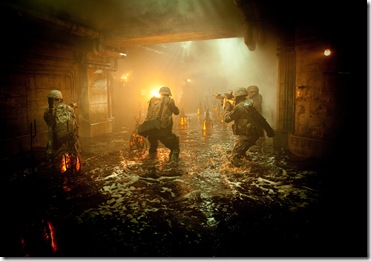 If all you want out of a movie is for gunplay, aliens and stuff getting blowed up real good, then Battle Los Angeles will work for you. If you’re looking for anything more – and I mean anything – then you’re S.O.L. [sorta outta luck].

Battle Los Angeles opens in the middle of said battle, then cuts quickly back to thirty-six hours earlier so that we might meet our main characters – a platoon of Marines – and follow them, however briefly, in their regular lives before they are called in to do evacuate Santa Monica and discover, to their stunned disbelief, that the meteor shower that threatens the city has slowed down before splashing into the water just offshore.

Among those characters are: Staff Sergeant Nantz [Aaron Eckhart], who is rumored to have let his men die in order to survive; Corporal Jason Lockett, whose brother was one of the men Nantz is alleged to have let die; Lance-Corporal Peter Kerns, who suffers from post traumatic stress disorder; Private first Class Shaun Lenihan, the virgin; Corporal Kevin Harris [Ne-Yo], and their green CO, Second Lieutenant William Martinez [Ramon Rodriguez].

While others are busy setting up a forward operations base, Martinez and his men are assigned the task of rescuing a group of civilians who are holed up in a West Los Angeles police station – before the area is thoroughly bombed. Getting there is difficult, but getting back is worse – they have a deadline, and alien soldiers have come ashore and are very tough to kill. Also, they can pinpoint the Marines’ location by tracking their radio communications.

There are other complications, too – like the enemy turning out to have air support that pretty much crushes ours. On the plus side, the Marines are joined by a couple of surviving soldiers from another team, and an Air Force Tech Sergeant [Michelle Rodriguez] who was on a mission to find the alien command center that controlled the alien drone flyers. 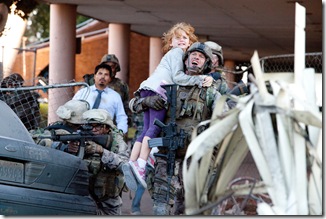 The big problem with Battle Los Angeles is that it’s a cowboys and indians movie with the people of Earth playing the part of the indians. The aliens have superior technology and arms and the easiest fuel source to find: water! Even though our side is badly outgunned, we know that the Marines will, somehow, figure things out and, with the help of Tech Sgt. Elena Santos, wind up kicking the crap out of that command center, giving our air support the advantage.

Battle Los Angeles is well done technically [beautifully shot – if with too much reliance on handheld, shakycam, well paced and featuring good effects] – director Jonathan Liebsman is essentially working with a script [by Chris Bertolini] that just piles on the clichés to the point where, when Nantz has an inspirational speech to motivate his men, it was all I could do to not laugh. And seriously, you can pretty much figure out who’s going to die – and which will be heroically and which will be senselessly – before the first shot has been fired.

Even the civilians are predictable. There’s one who can help Nantz figure out how to kill an alien soldier [a veterinarian played by Bridget Moynihan]; a father and son [Michael Pena and Bryce Cass], and two little girls [Joey King and Jadin Gould] whose sole purpose is to scream.

Then there’s the over-the-top score that doesn’t care if you notice how shamelessly it’s attempting to rouse a patriotic fervor in the audience. The cool electronic thing that made the trailers memorable doesn’t even show up at all!

Still, there’s the ‘stuff blowed up real good’ factor to consider. If that’s all you want, then definitely check out Battle Los Angeles. If you want more, check out Mars Needs Moms, Rango, or The Adjustment Bureau.