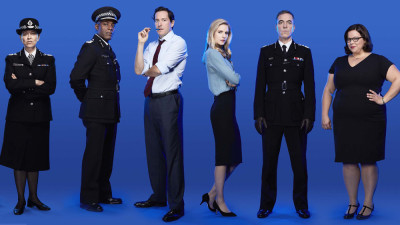 SundanceTV continues its acquisition of quality scripted dramas with Babylon (Thursdays, 10/9C) – a workplace drama set in London’s Scotland Yard. Created by Danny Boyle and starring Brit Marlin and James Nesbitt, it deals with the pressures of police work at all levels – culminating in the top job – and the struggle to maintain the public’s sympathy and trust.

Liz Garvey (Marling) is the new head of media relations at the Yard while Nesbitt is the buttoned down simmering volcano that is Commissioner Richard Miller (Nesbitt). When a riot occurs at a youth prison, Garvey sees an opportunity to move public opinion against the privatization of public sector responsibilities.

Deputy Mayor Grant Delgado (Ralph Brown) ambushes Miller in a meeting with news regarding the riot and questions Miller’s motives in the police’s handling of the situation.

Meanwhile, Armed Response officer Warwick (S.H.I.E.L.D.’s Nick Blood) is blindsided when a video of him shooting a robber goes live online. The shooting, which he thought was in response to an armed threat, shows that – even though, ultimately, the man was unarmed – he every reason to think that. Now, there’s a bounty placed on his head in response.

Elsewhere, police officer Robbie (Adam Deacon) is being given the gears as his unit heads into a potentially dangerous situation.

Babylon is an example of a dramatic satire. It banks less on humor than exaggeration and irony to point out the lack of intelligence in the politics surrounding a government’s abegnation of its responsibilities in the public sector in order to save money – in this specific case, privatization of the prison system – and the kind of problems that makes for those who still believe in not shirking that responsibility.

The premiere episode of Babylon is a hard-nosed, gritty hour that locks in on its target – privatization of public sector responsibilities – and, essentially, nukes it. It takes a single example of how such actions can lead to problems and surrounds that example with interesting characters  – all of whom have their own problems to deal with above and beyond that theme – yet which all come back around to it in not quite so obvious ways.

It has intelligence, with action and a striking sense of right and wrong – conveyed as much through the shades of grey which some of the show’s characters try to mask it as by the code of Commissioner Miller.

Babylon is, if you can take a single episode as any indication, a riveting entertainment.