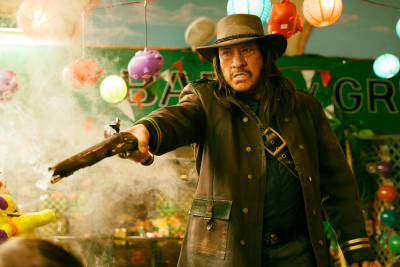 Season Two of From Dusk Till Dawn: The Series is set to premiere on Tuesday, August 25th (9/8C) on El Rey Network.

This season, things are very different for the Gecko brothers as the show’s characters – having survived their experiences at the Titty Twister – are now in different places, both personally and geographically.

Joining the returning cast of regulars for season two are Danny Trejo as The Regulator; Esai Morales as Lord Amancio Malvado; Jeff Fahey as Uncle Eddie Cruickshank  and Briana Evigan as Sonja Lam.

THE NEXT CHAPTER BEGINS: HIGHLY-ANTICIPATED SEASON TWO PREMIERE OF ‘FROM DUSK TILL DAWN: THE SERIES’ SET FOR TUESDAY, AUGUST 25 AT 9:00 PM ET ON EL REY NETWORK

Austin, TX (June 1, 2015) — The long-awaited return of the El Rey Network/Miramax supernatural crime saga, “From Dusk Till Dawn: The Series,” is set for Tuesday, August 25th at 9pm ET, it was announced today. With 10 all-new, action-packed hour-long episodes, season two of the horror/crime drama delves into a new and unexpected chapter for the characters after a night at the Titty Twister ripped apart everything they knew about themselves, each other and their souls.

Rodriguez said: “The first season of ‘Dusk’ reimagined the original film to allow us to expand our story and characters for future seasons. I’m excited for fans to now experience this completely new story arc where they will learn more about the Dusk universe and their favorite characters within this dark, dangerous, crime world with a supernatural edge.”

Called “radically different” and “a fascinating ride” by The Associated Press, season one of “From Dusk Till Dawn: The Series” centered on bank robber Seth Gecko and his violent, unpredictable brother, Richard “Richie” Gecko, who were on the run to Mexico when they encountered former pastor Jacob Fuller and his family, and took them hostage. Using the family RV to cross the border, chaos ensued when the group detoured to the Titty Twister, a strip club populated by culebras, snake-like ancient creatures who survive by drinking human blood. They were forced to fight until dawn in order to get out alive.

In Season Two, the show travels between Mexico and the edgy, tricked-out Texas of Robert Rodriguez. It also deepens and complicates the core relationships between the characters, while adding new faces and new dynamics. Our characters are all living in very separate worlds –Santánico and Richie are outside Houston, doing their best Bonnie and Clyde; Seth and Kate are scraping by South of the Border; and Freddie Gonzalez is protecting his wife and young daughter in the suburbs. Carlos Madrigal and Scott Fuller emerge from the Titty Twister, changed men. They will all come together once again – this time facing off against an even bigger threat.