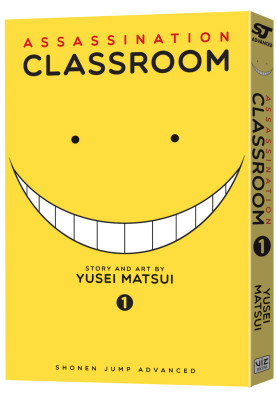 Imagine that you’re an almost indestructible alien with a globe for a head and tentacles. You have the power to blast the moon to a quarter of its size and planet to do something similar to the Earth – but not for a year. A year in which you are going to be a schoolteacher.

Nothing the planet’s best minds can do has stopped you; you could just as easily have just blown the planet to smithereens, but you want to teach – and not just any class. Oh, no. You want to teach 3-E – the class that’s composed of all the losers and rejects and kids who just don’t test well.

What’s up with that?

VIZ Media’s new Shonen Jump Advanced title, Assassination Classroom introduces us to class 3-E at Kunugigaoka Junior High: Nagisa, whose analytical skills are high, but everything else is a problem; Sugino, whose marks dropped quickly after he was cut from the baseball team; Karma, who actually gets good grades but keeps getting suspended for fighting, and Okuda, a chemistry whiz with no other academic or social skills.

Class 3-E is to have no contact with the rest of the school because while they are learning their various subjects, the government has given them another assignment – with full knowledge of their new teacher – to assassinate said teacher before the end of the school year. Besides saving the Earth, the one(s) who succeed will earn $10 billion yen.

Vol. 1: Time For Assassination opens with the teacher, call it Koro Sensei, asking the students to stand to recite the pledge. Immediately the room becomes a war zone, with everyone shooting the teacher (or trying to). When the fusillade ends, Sensei is still standing – he can move at Mach 20 (and, yes, when circumstances require, he can fly).

From the opening salvo, we then go back to the beginning for an explanation of what it was we just saw – and why a class would be trying to kill its teacher.

Before the first volume concludes, there will be more (and more imaginative) attempts, but along the way we will also see that Sensei is awfully good at his day job. Whether it’s helping Sugino work on his pitching form, or Okuda interact with the rest of her class, it seems to know exactly what’s needed to make each of its students their best.

So now we have a situation where the students of 3-E are beginning to enjoy school – many for the first time – and beginning to like their teacher, in spite of its plan to destroy the planet.

Created by Yusei Matsui (story and art), Classroom Assassination is one of those great ideas that works because once its bizarre/silly premise is established, it plays within the reals that have been created for it. And make no mistake, there are few more ludicrous premises out there – and far fewer that work.

What Matsui does is pretty simple – set up a unique premise; create an antagonist who is both fun and scary; create a class of protagonists who must deal with the antagonist whether they like it or not (the balance between ‘like or not like’ shifts as the series progresses), and play for big stakes.

Matsui’s art is not particular detailed except when required by the story. He keeps to fine linework for the most part and much of the story’s dynamism comes from well-designed layouts. He’s also pretty good at creating variations in character design – given the usual manga stylization and the school setting, his student characters could have been nearly identical clones. Instead, they are as varied as their skill and personalities would make them in real life.

It’s interesting that we never learn much about Koro Sensei, but that he is skilled at reading his students and adjusting his approach to their individual needs as well as treating them with respect as a group. Part of the fun of the series, as far as I can tell from Volume 1, is that as destructive as Sensei might be, he’s capable of just as much creation.

Assassination Classroom is, appropriately, a blast!