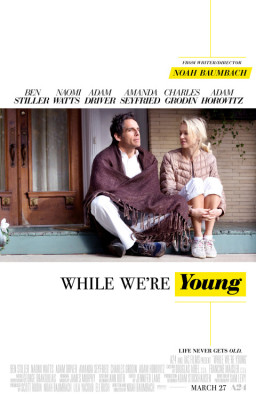 AFI Silver Theatre in Silver Spring, MD will be holding a special Noah Baumbach retrospective March 22-24 in advance of the opening of his newest film, WHILE WE’RE YOUNG, which opens in DC theaters on Friday, April 3. Noah Baumbach has been a leading voice in indie film for two decades. AFI is presenting a mini-retrospective of his films that explore the paradoxes of being in high school, the liberation of college, the confusion of young adulthood and, finally, the reflection that comes with adulthood. This is a ticketed event and tickets can be purchased on the AFI Silver website: http://www.afi.com/silver/.

Films to be included are as follows.

Ben Stiller and Naomi Watts are Josh and Cornelia Srebnick, happily married middle-aged members of New York’s creative class.  They tried to start a family and were unable to — and have decided they’re okay with that. But as Josh labors over the umpteenth edit of his cerebral new film, it’s plain that he has hit a dry patch and that something is still missing.

Enter Jamie (Adam Driver) and Darby (Amanda Seyfried), a free-spirited young couple, who are spontaneous and untethered, ready to drop everything in pursuit of their next passion — retro board games one day, acquiring a pet chicken the next. For Josh, it’s as if a door has opened back to his youth — or a youth he wishes he once had. It’s not long before the restless forty-somethings, Josh and Cornelia, throw aside friends their own age — including Beastie Boy Adam Horovitz in a sly supporting role — to trail after these young hipsters who seem so plugged in, so uninhibited, so Brooklyn cool. “Before we met,” Josh admits to Jamie, “the only two feelings I had left were wistful and disdainful.” But is this new inspiration enough to sustain collaboration and friendship with a couple twenty years their junior?

While We’re Young is an openly funny cross-generational comedy of manners about aging, ambition and success, as well as a moving portrait of a marriage tested by the invading forces of youth. No film has better captured the weird, upended logic of urban sophisticates: the older ones embracing their iPads and Netflix, the young ones craving vinyl records and vintage VHS tapes.

Powered by Stiller and Driver’s note-perfect lead performances and loose, comic turns by Watts and Seyfried, While We’re Young is a complete pleasure to watch.