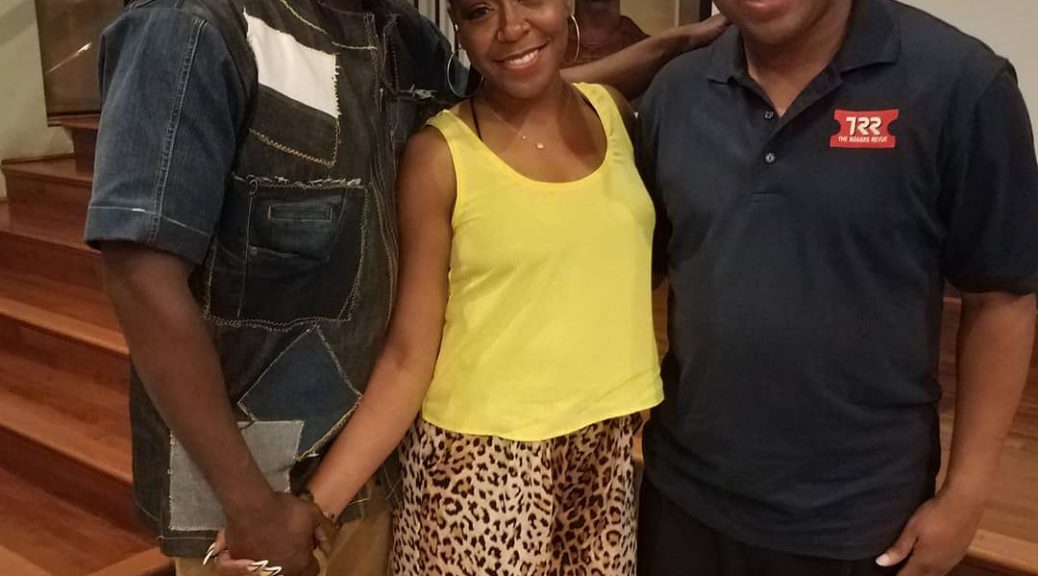 In the second part of EM’s “The Last Black Man in San Francisco” INTERVIEWS, I sat down with two more stars of this amazing film. Rob Morgan plays James Sr., the father of Jimmie played by Jimmie Fails and Tichina Arnold who plays Jimmie’s aunt Wanda. And away we go!

What drew you two to this film?

Rob Morgan (James Sr.): Yeah, it has been and I’m going to have to tell you straight up. When the script came across my desk, I was just so impressed with the refreshing take on the black male experience in America.

I was so impressed at how the voice was a poetic one, you know what I’m saying? And not the typical, everyday imagery that we’re used to seeing and I feel that art imitates life, and life imitates art, and it’s long overdue to have a piece of art out there in a film like this to depict black men in a humanistic form, and hopefully it can start projecting that way in everybody’s lives, including ours.

Tichina Arnold (Wanda Falls): Oh, same here. Rob and I, we just start talking about how grateful we were to be part of this project, because me, as a black woman in Hollywood, I don’t get a lot of roles that are written for me.

And to have—when I read the scene that Wanda has with Jimmie, I was like, “ooh, I gotta do this role! I gotta do it, I gotta do it, I gotta do it!” So, I auditioned. I busted my ass to get this role to prove that I was worthy to be a part of a project like this. I did not know that the dynamic between Jimmie and Joe, which I think outside of the movie is a great relationship that they have, them coming up together in San Francisco and them telling the story.

Working so hard, and they have a Kickstarter going in. And actually, when I got the script I looked up their names and it led me to their Kickstarter. And I was like, “wow! They’ve been trying to make this for a minute!” That was another thing, I was like “yeah, I want to be a part of this. This is a labor of love.”

TA: It comes from a real place.

RM: I think it’s an epic film that’ll go down in history, really. I think it’s ten years ahead of its time.
Yep. Hopefully, time will catch up with the film. I think it’s such a broad paint stroke from masculinity to relationships to love to gentrification, that is yet all the human experience. All, anything you walk on this earth that is human in this movie, and I think everybody can relate to it on one level or another.

TA: It’s happening all over.

TA: You hear peoples’ stories all the time. It was very interesting for Rob and me, where we stayed, in The Tenderloin.

TA: We stayed in a motel because it was a low-budget film, which I’m grateful for it now because we got to see a part of San Francisco that—ooh, because you know I’m used to flying in. Shopping at Sacks 5th Avenue and flying back out.

TA: And this time, I was like, “whoa!” Just seeing the young homelessness, to see the multicultural homelessness. And people that are drug addicts, products of that environment. San Francisco, I didn’t realize was so rich in history that it had. I just learned a lot about it. I didn’t know Danny Glover was from San Francisco.

Yeah, I did not know that either.

TA: I’m like, “ok!” You know how Danny is! This movie has so many different layers. I watched it three times. Usually, I hate seeing a movie twice and I hate seeing myself on film, so I had to sit through this movie three times, and each time I saw something, I heard something different. And hopefully, a lot of people will come to see it and they’re going to have to see it twice.

RM: Our movie touches on stuff like that, you know?

Exactly! But then again, I think its a touch on 1960’s Haight-Ashbury District, the Summer of Love.”

RM: We had our “San Francisco” premiere at the Castro Theater.

RM: Oh my God, it was such an amazing reception.

TA: It was infectious.

RM: Yes, that was some energy. You had to be there to get it.

Yeah, and I heard that Barry Bonds was at that premiere.

RM: On the phone, Barry…

RM: Delroy Lindo was there.

TA: Oh really? I love him! I didn’t know he was there!

Where were you? (laughs)

RM: She was backstage protecting the furniture. Go on, Dean. What other questions you got, brother?

What was it like to work with both Joe as a first time director and Jimmie, since you both worked with Jimmie in different scenes throughout the film?

There he is! (Director Joe Talbot walked past the table during the interview)

TA: There he is! Mr. Director!

TA: I’m going to tell him how much I fucking hate you! (laughs)

RM: You know, when people ask about working with first timers and stuff like that, and I come from the idea that I had to be a first-timer at one point. You see what I’m saying? Like, I came to the set with an open and clean sheet of paper to learn just as much as to get what I have through experience, so working with a first time director, first-time actor, Jimmie Fails, I mean, man. The way that those brothers and sisters onset came prepared to work, it felt like I was working with a bunch of seasoned professionals.

RM: You know, Joe really had a set that was set up that made us all feel comfortable enough to be open and vulnerable and honest and play. So, the first time thing, I don’t know if I really felt that. I mean, because I had to be a first timer at some point too. Somebody had to through me, you know?

TA: It was a labor of love. You got to the set, and you just knew everybody wanted it. And unfortunately, with films, everybody sees the end result. You see the finished result, but the process to what it takes to get that film down to the brick. Everybody just wanted it to happen. Now, it met its obstacles, as Joe was telling us a little earlier. It had its moments where it could’ve been stopped or halted or pushed back, but everybody plowed through. We got on the set and you wanted to be there. You wanted to be there. Even the first scene that I’m in, I couldn’t picture the film. Reading it was the first time I read a script and couldn’t picture it. Your imagination is bigger than anything, but I could not picture it. I was thinking, “how is he going to shoot this? What are they going to do with this?”

Because of the verbiage in the film. So, it wasn’t until I was there, waiting for my cue to go outside and greet Jimmie and Montgomery, and I’m looking at Joe say, “ok, I want you to walk through this field.” I’m watching them walk through the field and I’m like, “oh, so that’s how he’s shooting it.” This film is going to be beautiful!

TA: You know? It’s like, beautifully imperfect.  You know? And I think this film should be shown in schools.

Yes, I definitely agree. Well, not in elementary schools. (laughs)

TA: But you know, this film—

TA: Just so people can have a sensitivity to other humans. Black men are human.

RM: Mm-hmm, and a place they can call home.

TA: A place they can call home and rest their head, but unfortunately, due to economic disparities, there is no middle class. I come from a family where my dad was a police officer, my mom worked in the Department of Sanitation. We lived paycheck to paycheck, but we survived. Here, you have that little bit that we have been snatched away. So there are a lot of people who have suffered from that economic disparity and not just only black folk. It’s not just black folk, but I’m happy this movie is being told through the eyes of a black man. I’m happy that a black man can tell his own story.

See Tichina and Rob in the powerful film “The Last Black Man in San Francisco” in DC Theatres, tomorrow! In case you miss the first interview with director Joe Talbot and star Jimmie Fails, click here!