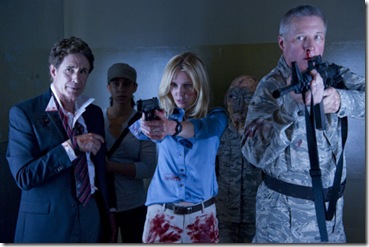 One of Roger Corman’s important rules is that you don’t show the monster right away [a rule that a number of his productions for Syfy has ignored] – partly because what you imagine is scarier than anything you can put on screen, and partly because his usual budget didn’t allow for monsters that would hold up until intense scrutiny. Area 51 [Syfy, 9/8C] schools the master in that regard – also in smarts, suspense, effects and sheer fun.

We open on a TV newsflash: anchorwoman Sharon Solomon [Tammi Arender] reveals that the government has opened Area 51 to the press – specifically, Claire Fallon [Vanessa Branch, Star Trek: Voyager, Pirates of the Caribbean 1-3], the world’s most popular news blogger, and Sam Whitaker [John Shea, Lois & Clark, Gossip Girl], big-time print reporter. She is accompanied by her photographer, Kevin [Damon Lipari] and he by his camerawoman, Mindy [Lana Clark].

While they are being shown around Level One by Col. Ronald Marlin [Bruce Boxleitner, Babylon 5, TRON: Legacy], all hell is breaking loose on deeper levels. Patient Zero [Jed Maheu] – a morpher – has broken free and is setting free other denizens of the classified section.

Outside, on the surface, Sgt. Hannah [Rachel Miner] and Aaron Schumacher [Jason London] carry on a conversation about what’s really going on inside. She was turned into a hero [against her will] by the military press – and exposed by Fallon; he accidentally shot himself in the foot and became the butt of jokes on base.

Area 51 is pretty close to the perfect B-movie: it’s smart, knowing, fast-paced and features some cool make-up effects and costumes. The men [and woman] in the rubber suits for Patient Zero, Lady Death [Ivan Djurovic], Little Devil and J Rod [both physically played by VyVy Nguyen – though J Rod is voiced by Rob Steinberg] are as over-the-top, or subtle as required and the actual suits are remarkably good for such a low budget offering.

Boxleitner’s Marlin is the kind of hard-ass commanding officer whose men will [and do] follow him into hell. Fallon is sharp, abrasive and tough – and knows how to use a gun. Whitaker is suave, smart and a charmer. Mindy is there because she’s always wondered if we were alone in the universe; Kevin just wants to get ‘the shot’ [and, of course, he does…].

The script, by Kenny Yakkel [from a story by Lucy Mukerjee], is genuinely clever, riffing on science fiction clichés in fun ways and giving the cast roles that really let them dig in. He also manages to hold out for an hour and twenty minutes before he has someone say, ‘Cover me!’

Jason Connery puts every penny of his budget onscreen. His direction matches the script for cleverness, as he cuts between the press tour and the carnage [it’s a B-movie SF thriller – there’s gotta be blood!] going on below them – bringing them together in a manner that achieves maximum impact with a minimum of fussiness. He manages to produce more suspense and more genuine ‘jump moments’ than any number of well regarded big screen thrillers, too.

Overall, Area 51 is the kind of goofball B-movie that can be described as rollicking… also witty, scary and just plain fun. It’s as unexpected a small gem as last year’s Mongolian Death Worm.