The Walking Dead’s winter premiere will bring a little heart (and assorted other organs) to your homes on Sunday, February 14th (9/8C) – followed by a little four-color geekery on the winter premiere of Kevin Smith’s Comic Book Men (Midnight/11C). 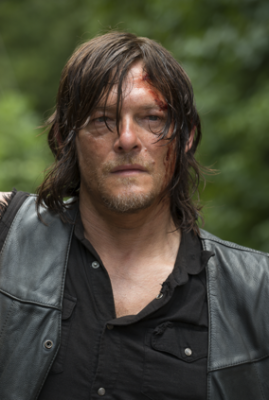 Norman Reedus as Daryl on “The Walking Dead”

FOR IMMEDIATE RELEASE – This Valentine’s Day, viewers won’t want to miss the return of season six of “The Walking Dead,” the series that continues to be the #1 show on all of television among the coveted 18-49 demographic, airing Sunday, February 14 at 9 p.m. ET/PT.  To get in on the action early, download the AMC app to see the first four minutes of Sunday’s new episode, available this Wednesday.  In the mid-season premiere “No Way Out”– written by Seth Hoffman and directed by Greg Nicotero – with walkers inside the gates of Alexandria, Rick and the group are scared, outnumbered, and things are only getting worse. During the telecast, viewers will get a sneak peek of the highly anticipated season five premiere of “Better Call Saul,” which premieres the following night.  Then, viewers can catch a new episode of the live after-show “Talking Dead” hosted by Chris Hardwick at 10:00 p.m. ET/PT.

In the second half of season six of “The Walking Dead,” Rick Grimes and his band of survivors discover a larger world beyond what they understood it to be.  In this new reality, there are new dangers, new opportunities, and new complexities to face.  To claim their place in this newfound landscape, the group must become the threat themselves, as terrifying as any of the adversaries they’ve encountered.

Based on the comic book series written by Robert Kirkman and published by Image Comics, “The Walking Dead” reigns as television’s most watched drama for Adults 18-49. “The Walking Dead” tells the story of the months and years that follow after a zombie apocalypse, and follows a group of survivors, led by police officer Rick Grimes, who travel in search of a safe and secure home.  The series is executive produced by Scott M. Gimple, Robert Kirkman, Gale Anne Hurd, David Alpert, Greg Nicotero and Tom Luse. 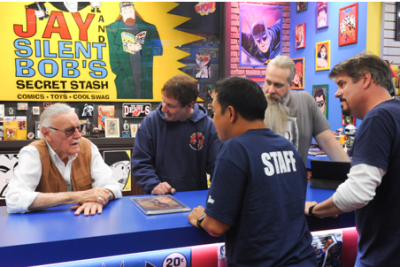 Rounding out the highly anticipated Sunday night lineup is the mid-season premiere of “Comic Book Men” season five on Sunday, February 14 at Midnight ET/PT. On the all-new episode, “Stan Saves!” Stan Lee drops by the Stash and helps the guys with a customer experiencing a comic’s crisis.  A customer buys a classic issue of Fantastic Four.

In its fifth season, AMC’s popular unscripted series “Comic Book Men” takes another dive into geekdom by following the antics in and around master fanboy Kevin Smith’s New Jersey comic shop, Jay and Silent Bob’s Secret Stash.  Leading the fearless team behind the shop’s counter are Walt, Mike, Bryan and Ming, who geek out over mind-blowing pop culture artifacts and the legends behind them. Special guests this season include comic book mastermind Stan Lee and artistic genius John Romita Jr. Whether it’s buying and selling memorabilia or embarking on wild adventures away from the store, The Stash cast shares all the juicy details with Kevin during their hilarious podcast, which is woven throughout the series. 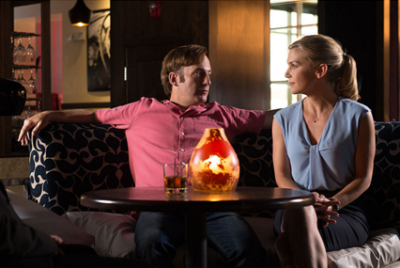 Viewers can catch up on “Better Call Saul” before the season two premiere with an all-day marathon of  season one beginning Monday, February 15 at 11:15 a.m. ET/PT, and leading into the highly anticipated season five premiere on Monday, February 15 at 10 p.m. ET/PT. On the premiere episode of “Better Call Saul,” “Switch” – written by Vince Gilligan and Peter Gould, and directed by  Gilligan – Jimmy and Kim’s relationship takes a new turn. Mike decides it’s for the best to sever his affiliation with an unrestrained associate. Critics are already raving about season two, including Brian Lowry of Variety who said, “The story gained momentum as its first season progressed, and based on these opening chapters, there’s reason to believe that will be the case again.”