Comic Book Men (AMC, 1 am/midnight C) returns for its seventh season (only one less than The Walking Dead) on October 22nd with, of all things, a special Walking Dead episode.

END_OF_DOCUMENT_TOKEN_TO_BE_REPLACED

The Walking Dead’s winter premiere will bring a little heart (and assorted other organs) to your homes on Sunday, February 14th (9/8C) – followed by a little four-color geekery on the winter premiere of Kevin Smith’s Comic Book Men (Midnight/11C).

END_OF_DOCUMENT_TOKEN_TO_BE_REPLACED 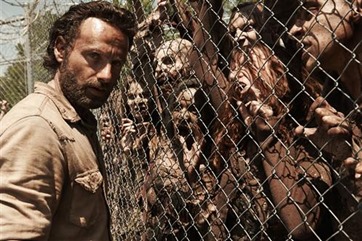 If you’re looking to an alternative to the mind-numbing day of Super Bowl programming that will be February 2nd, here’s a thought: AMC is running a Walking Dead Marathon they are dubbing the Zombie Bowl Marathon. Beginning at 10 am, Sunday, February 2nd, the network will be giving its audience a chance to catch up on ‘the ultimate game of survival on a day-long Humans vs. Walkers showdown.’ that feature back-to-back episodes from The Walking Dead’s first two seasons.

Then, on Sunday, February 9th (9/8C) the series returns for its mid-season premiere, followed by the return of Talking Dead, with guests Danai Gurira and special effects makeup supervisor Greg Nicotero at 10/9C. Check out the press, after the jump, release for more details.